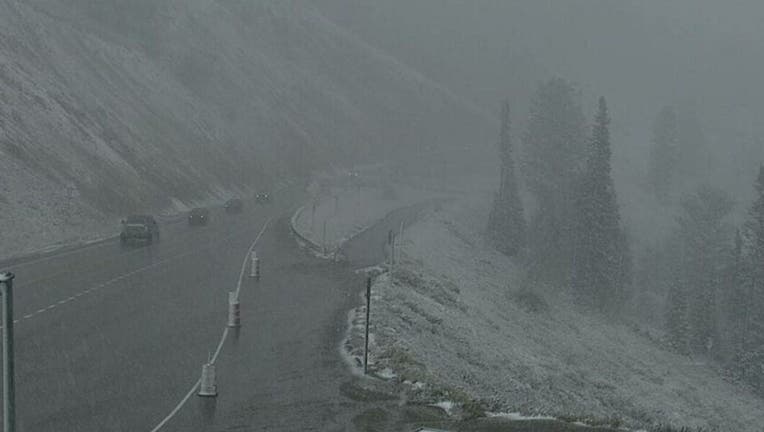 It may be the tail end of summer, but some parts out West on Monday skipped right to winter.

Higher elevations in parts of Wyoming and Montana saw some snowfall on Monday as a cold front brought in weather more appropriate for winter than late August.

The National Weather Service (NWS) had issued a hazardous weather alert for freezing conditions on Sunday night into Monday.

"Freezing temperatures are expected early this morning for the far western valleys," the NWS forecast office for Riverton, Wyo said.

A hiker exploring the Teton Pass in Wyoming captured some of the snow falling in a lush forest in the region.

The frosty weather made for dangerous road conditions, with one crash reported along Teton Pass Monday afternoon.

Drivers were urged to be careful while driving in conditions more appropriate for December than August, as temperatures also fell into the 30s.

The resort shared videos of flakes falling and accumulating on some surfaces.

"Snow on August 31," the resort tweeted. "The countdown to ski season is on with 87 days left until we open on Thanksgiving."

The brief return to winter-like conditions only lasted a day. Temperatures across the region are forecast to rise into the 60s and 70s on Tuesday.

The flakes out West may be a precursor to what could be a rough winter ahead.

The Farmers’ Almanac recently released its extended forecast for the 2020-2021 season, which shows this upcoming winter could be brutally cold and snowy for much of the country.

“Based on our time-tested weather formula, the forecast for the upcoming winter looks a lot different from last year, quite divided with some very intense cold snaps and snowfall,” editor Peter Geiger said in a statement.

Long-range forecasts from the periodical are calling for normal to below-normal temperatures in areas from the Great Lakes and Midwest stretching westward over the Northern and Central Plains and into the Rockies.