Violent crimes are on the rise in Tampa

TAMPA, Fla. - New numbers suggest that violent crime in the city of Tampa has surged in the first few months of 2020, but it may not be the pandemic shutdowns fueling the alarming trend. At least one county commissioner thinks gangs could be to blame.

This week alone, there was a shooting in Tampa’s Highland Pines neighborhood Sunday. Then on Monday, more gun violence at 50th Street and Sligh Avenue.

On Tuesday there was another shooting at East Palifax and 26th. Each of these incidents happened in or near heavily populated areas with homes and businesses.

The crime numbers come amid job losses, business closures and widespread shutdowns due to the COVID-19 pandemic. But some local leaders say it's gangs that are driving the rise in violence. 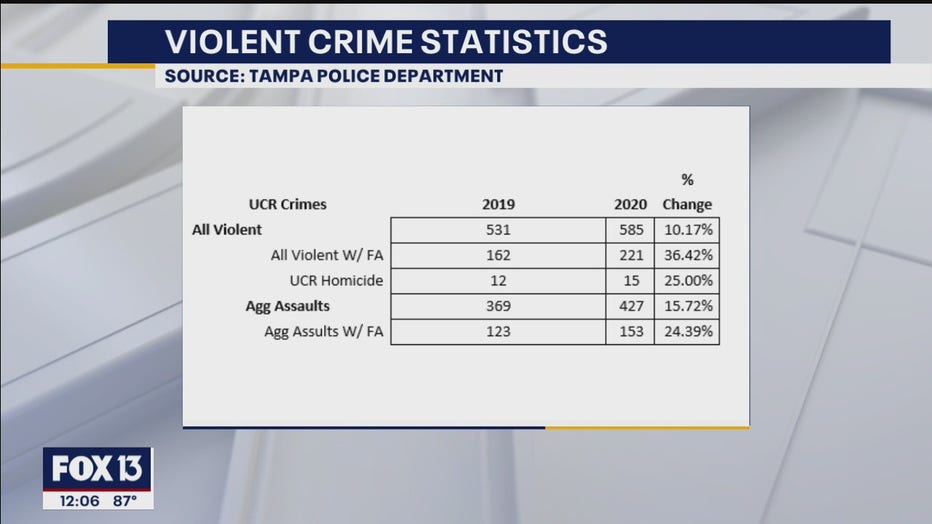 “We have a gang violence problem in Tampa and Hillsborough County,” County Commissioner Les Miller said during a news conference held over Zoom on Wednesday. “I don’t care what law enforcement says. Those are gangs. We have to face the fact that there are gangs out there.”

During the meeting, organized by Tampa City Councilman Orlando Gudes, officials urged people to report large gatherings in their neighborhoods to police. These kinds of gatherings are currently banned under statewide efforts to slow the spread of infection.

Councilman Gudes also discussed the possibility of gun buyback programs and the need to end the stigma surrounding "snitching."

Throughout the meeting, local leaders urged anyone with information on any of the recent violent incidents in Tampa to come forward and assist investigators.