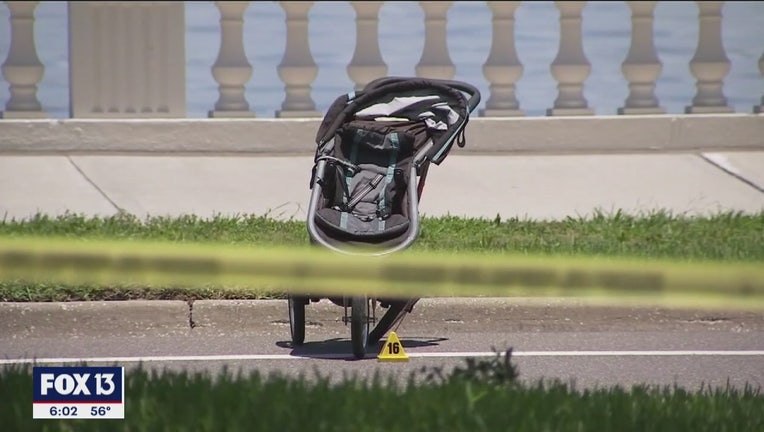 Lillia's stroller on Bayshore Boulevard after the crash.

TAMPA, Fla. - City Council members in Tampa are including residents in the search for a solution to speeding concerns on Bayshore Boulevard. They've called a special meeting to broach the topic Thursday morning. Residents are invited to tune in virtually, and make their comments.

City officials adapted the public comment portion to comply with social distance guidelines as well. Those wishing to give comment have a deadline of Wednesday morning to submit via voicemail, written letter, or internet submission. Residents could also register ahead of time to speak during the meeting.

The picturesque Bayshore Boulevard has been scarred with several deadly accident scenes over the past two years. Two years ago, a mother and daughter were killed by teen drivers allegedly racing.

In January, a suspected drunk driver struck and killed a jogger.

Earlier this month, a cyclist in a crosswalk and a motorcyclist died following a crash.

Authorities said speed was a factor in all three tragedies.

City officials said Thursday's meeting is meant to find real workable solutions, not only on Bayshore, but across the city.

The virtual town hall is schedule to start at 9 a.m.

Spectrum TV customers can view the meeting on channel 640.

Frontier customers can view the meeting on channel 15.

Lastly, the City of Tampa government livestream can be accessed here.