CLEARWATER, Fla. - Researchers began mapping a field next to the Frank Crum building in Clearwater as part of an ongoing search for unmarked graves at various sites across the Bay Area.

Tuesday, ground-penetrating radar rolled up and down the site, searching beneath the earth.

"Early 1900s until the 1940s, there used to be a school behind us, Williams Elementary, according to the community, the cemetery was behind the school somewhere nearby," said Jeff Moates, director of the West Central Regional Center of the Florida Public Archaeology Network.

Historians believe the field on the Frank Crum staffing firm property could be where the first cemetery for Clearwater’s African American community once was.

In the 1950s, graves with markers were said to have been moved, leaving potentially dozens of unmarked burials still there.

"It seems to be pretty common in the Tampa Bay area. Unfortunately, this happens to a certain set of graveyards where others are kept in place," Moates said. 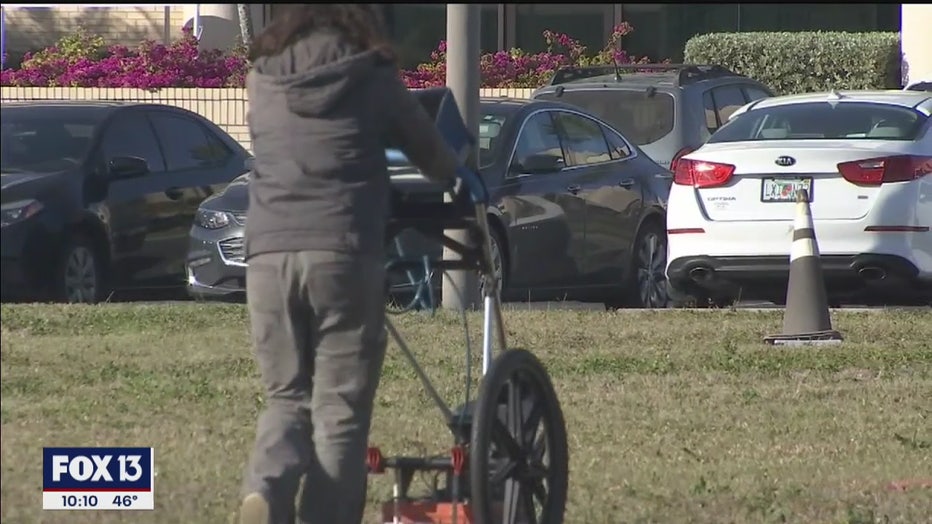 In recent months, unmarked graves have been discovered across Hillsborough County, from school grounds to community housing and businesses and even MacDill Air Force Base.

The Frank Crum site will take a few weeks to fully investigate.

"If there are graves on that site, they need to be remembered and memorialized," said Zebbie Atkinson, president of the Clearwater/Upper Pinellas NAACP

Exactly how they would be memorialized won’t be announced until all the data comes back, but some kind of historical marker is a possibility.

"In talking to the professionals that do this daily, they recommend not moving them any bodies that would be there and making the area a memorial," Atkinson said.