Police Chief William McManus said a city worker at the scene was alerted to the situation by a cry for help shortly before 6 p.m. Monday.

SAN ANTONIO (AP) - Forty-six people were found dead and 16 others were taken to hospitals after a tractor-trailer rig containing suspected migrants was found Monday on a remote back road in southwest San Antonio, officials said.

A city worker at the scene was alerted to the situation by a cry for help shortly before 6 p.m. Monday, Police Chief William McManus said. Officers arrived to find a body on the ground outside the trailer and a partially opened gate to the trailer, he said. 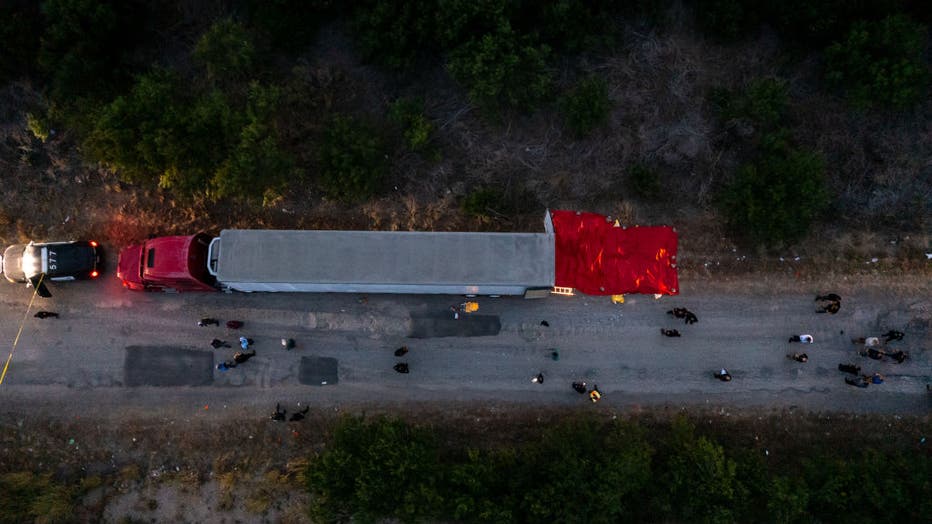 In this aerial view, members of law enforcement investigate a tractor trailer on June 27, 2022 in San Antonio, Texas. According to reports, at least 46 people, who are believed migrant workers from Mexico, were found dead in an abandoned tractor trai

Of the 16 taken to hospitals with heat-related illnesses, 12 were adults and four were children, said Fire Chief Charles Hood. The patients were hot to the touch and dehydrated, and no water was found in the trailer, he said.

Three people were taken into custody, but it was unclear if they were absolutely connected with human trafficking, McManus said.

Those in the trailer were part of a presumed migrant smuggling attempt into the United States, and the investigation was being led by U.S. Homeland Security Investigations, McManus said.

Those in the trailer were in a presumed migrant smuggling attempt in South Texas, according to an official who spoke to The Associated Press on condition of anonymity because the information had not been authorized for public release.

More than 20 migrants were found dead inside the back of a tractor-trailer in San Antontio, Texas, on Monday. Authorities have not confirmed the number of dead but Rep. Tony Gonzales, a Republican who represents Texas, tweeted that 42 people died.

It may be the deadliest tragedy among thousands who have died attempting to cross the U.S. border from Mexico in recent decades. Ten migrants died in 2017 after being trapped inside a truck that was parked at a Walmart in San Antonio. In 2003, 19 migrants were found in a sweltering truck southeast of San Antonio.

Big rigs emerged as a popular smuggling method in the early 1990s amid a surge in U.S. border enforcement in San Diego and El Paso, Texas, which were then the busiest corridors for illegal crossings.

Before that, people paid small fees to mom-and-pop operators to get them across a largely unguarded border. As crossing became exponentially more difficult after the 2001 terror attacks in the U.S., migrants were led through more dangerous terrain and paid thousands of dollars more.