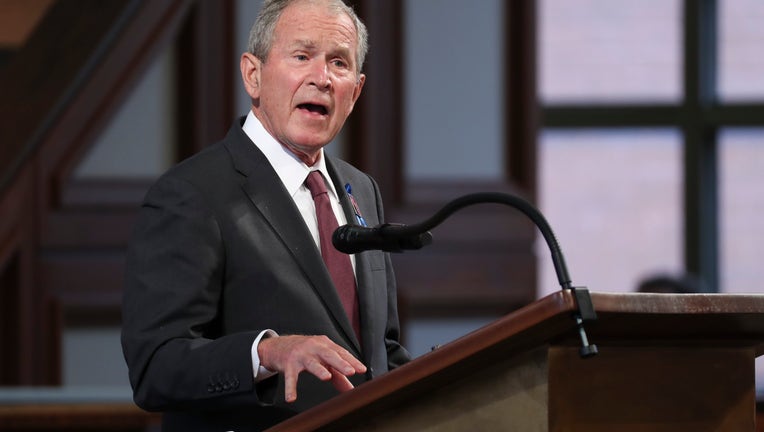 DALLAS - Former President George W. Bush repeated his criticism of the Republican Party, warning members the GOP will cease to exist if they choose to isolate themselves from other races and cultures.

"If the Republican Party stands for exclusivity — you know, it used to be country clubs, now evidently it's White Anglo-Saxon Protestantism — then it's not going to win anything," Bush said in a podcast interview with The Dispatch last week.

The 43rd president was referring to the idea of some Republican members are reportedly considering forming a separate caucus to protect nativist values.

Some hard-right House Republicans recently discussed forming an America First Caucus, which one document obtained by The Associated Press described as championing "Anglo-Saxon political traditions" and warned that mass immigration was putting the "unique identity" of the U.S. at risk.

The U.S.-Mexico border is seeing a surge of migrants.

The group is calling for limiting legal immigration "to those that can contribute not only economically, but have demonstrated respect for this nation’s culture and rule of law." It voices support for infrastructure "that reflects the architectural, engineering and aesthetic value that befits the progeny of European architecture."

The AP could not independently confirm the organization’s origins or current status, but Rep. Matt Gaetz, R-Fla., said he was joining and indicated that fellow conservative Rep. Marjorie Taylor Greene, R-Ga., was behind it.

Gaetz tweeted: "I’m proud to join @mtgreenee in the #AmericaFirst Caucus. We will end wars, stop illegal immigration & promote trade that is fair to American workers."

"I’d say they’re not going to be a party," Bush said of the GOP in the podcast interview, dismissing the idea of a caucus. "To me that basically says that we want to be extinct."

However, he said he believes the GOP can get back on track to being fiscally conservative and promoting limited government.

"I think Republicans will have a second chance to govern because I believe the Biden administration is a uniting factor," he continued.

President Biden, in his first address to a joint session of Congress last week, laid out his vision for America.

This isn’t the first time Bush had sharp words for the political party in recent weeks.

Last month, he said the Republican Party has become "isolationist, protectionist and, to a certain extent, nativist" and says he’s especially concerned about anti-immigration rhetoric.

"It’s a beautiful country we have and yet it’s not beautiful when we condemn, call people names and scare people about immigration," Bush told NBC’s "Today" show.

The former president did not mention Donald Trump, who aggressively curbed both legal and illegal immigration during his tenure and sought to build a "big, beautiful wall" at the southwest border with Mexico to keep out migrants. Trump, a fellow Republican, disparaged the migrants as invaders and "illegal aliens" and, as a candidate, referred to Mexicans as "rapists."