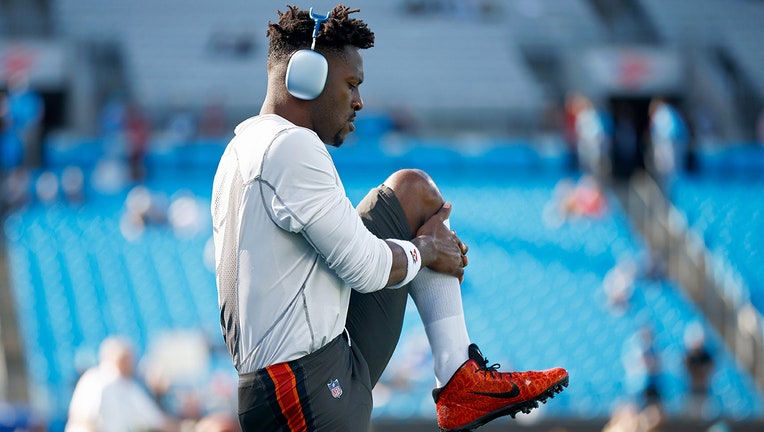 CHARLOTTE, NORTH CAROLINA - DECEMBER 26: Antonio Brown #81 of the Tampa Bay Buccaneers warms up before the game against the Carolina Panthers at Bank of America Stadium on December 26, 2021 in Charlotte, North Carolina. (Photo by Jared C. Tilton/Gett

TAMPA, Fla. - Now-former Tampa Bay Buccaneer Antonio Brown made a dramatic, shirtless exit from the field during the third quarter of Sunday's game against New York Jets. After the game, Coach Bruce Arians said Brown was off the team.

Three days later, Brown has released a statement saying he played through extreme pain, had been injected with a "powerful and sometimes dangerous painkiller," and was pressured by an unnamed coach to play while injured.

In the two-page statement, Brown says he played "until it was clear that I could not use my ankle to
safely perform my playing responsibilities," and quoted a coach he says shouted at him when he tried to rest.

I took a seat on the sideline and my coach came up to me, very upset, and shouted, "What's wrong with
you? What's wrong with you?" I told him, "It's my ankle." But he knew that. It was well-documented and we had discussed it. He then ordered me to get on the field. I said, "Coach, I can't." He didn't call for medical attention. Instead, he shouted at me, "YOU'RE DONE!" while he ran his finger across his throat. Coach was telling me that if I didn't play hurt, then I was done with the Bucs.

Brown’s meltdown came late in the third quarter with Tampa Bay trailing the Jets 24-10. He appeared animated while talking to teammate Mike Evans when he stripped off his pads, jersey, gloves and T-shirt — tossing the gloves and T-shirt into the stands — and then walked bare-chested down the sideline and into the end zone. He then waved to fans as jogged through the end zone and into the tunnel at MetLife Stadium.

According to FOX Sports’ Jay Glazer, Arians said Brown refused to go back into the game so the head coach told him he was done for the day. That apparently triggered Brown's actions.

In his statement, Brown says he has reflected on his reaction to the situation, "but there was a trigger."

"The trigger was someone telling me that I'm not allowed to feel pain. I acknowledge my past. But my past does not make me a second class citizen. My past does not forfeit my right to be heard when I am in pain," the statement said, in part.

It’s not the first time this season Brown ran into trouble. He was handed a three-game suspension last month for violating the league’s COVID-19 protocols.

He also has a history of personal conduct issues resulting in being cut from two other teams in the last two years.

Brown says the worst part of this situation was not being cut from the team, but the "totally false narrative" surrounding the circumstances.

"They are telling people that first I walked off, then I was cut. No. No. No. I was cut first and then I went home. They threw me out like an animal and I refused to wear their brand on my body, so I took my jersey off," Brown said.

In his statement, Brown says he had an MRI on his ankle Monday, which showed broken bone fragments, a torn ligament, and cartilage loss, all of which will require surgery.

Brown ended his statement with a message for his fans and former teammates, thanking everyone who "showed me grace and believed in me."

I gave the Bucs everything I had on the field. What the organization is doing now needs to get cleaned up. I do not understand how people publicly claiming to be concerned about my mental health can do these things to me in private. Once my surgery is complete, I 'II be back to 100% and looking forward to next season. Business gonna be BOOMIN!

Brown's lawyer also tweeted a series of statements, chiding anyone who might claim Brown faked injury to cover up mental health issues.

"Antonio Brown never faked an injury in his life. It is incredible that people are pushing false rumors that what happened Sunday was the result of mental health issues and not a well known ankle injury. Mental health is important, but so is basic dignity," attorney Sean Burstyn tweeted.

Burstyn also said in tweets that the NFL does not condone ordering players to take the field if they are in pain or at risk of serious injury.