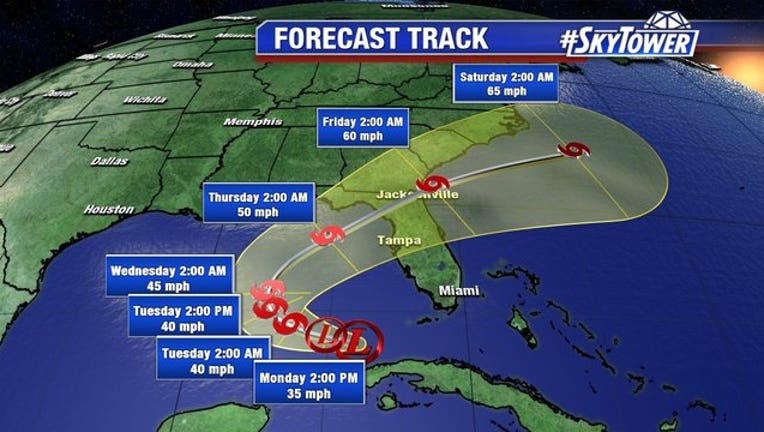 The National Hurricane Center in Miami says the depression is located about 55 miles north of Havana, and about 60 miles south of Key West. Maximum sustained winds were 35 mph as of Sunday evening and it was moving west at 9 mph.

The storm is expected to slowly move westward into the Gulf of Mexico while also gradually intensifying. The official forecast calls for it to become a tropical storm by Monday night/Tuesday morning.

By mid-week, the storm is expected to take a turn to the north and eventually the northeast. There is still a decent amount of uncertainty in the future intensity of the system, but the NHC forecast is a rather conservative one, maxing out the winds at 50 mph.

At some point on Thursday, the storm is forecasted to make landfall somewhere along the Northeast Gulf coast. Areas from Mobile to Naples should pay attention to the forecast in the coming days for updates.

The storm's center is expected to pass offshore of the Outer Banks of North Carolina on Tuesday.

Separately, Hurricane Gaston has become the season's first major hurricane as it continues northwestward in the Atlantic, but forecasters say it poses no threat to land.

On Sunday, Gaston was clocking maximum sustained winds of 115 mph (185 kph) winds. The storm was located about 580 miles (935 kilometers) east of Bermuda. Gaston was moving northwest at about 5 mph (7 kph).