LAUDERDALE-BY-THE-SEA, Fla. - Tropical Storm Nicole hit Florida as a hurricane in the early morning hours Thursday, quickly getting downgraded as it weakened after making landfall — but not before it left destruction in its wake.

Residents along Florida's east coast woke up to flooding and wind damage from the sprawling storm, which covered nearly the entire weather-weary state with damaging winds extending as far as 450 miles from the center.

In Broward County, Anglins Fishing Pier in Lauderdale-By-The-Sea partially collapsed due to storm surge from Nicole.

Aerial footage from WSVN showed a large center portion of the pier missing from the structure, while the remaining part suffered extensive damage with many planks and railings missing.

According to Broward County's tourism bureau, the pier was originally built by Lauderdale-By-The-Sea town founder Melvin Anglin in 1941. The pier "crumbled and fell into the ocean" about two decades later, and it was rebuilt in 1963.

The pier sustained damage from Hurricane Irma in 2017 and much of the pier, from the middle to the end, had been closed to the public ever since. 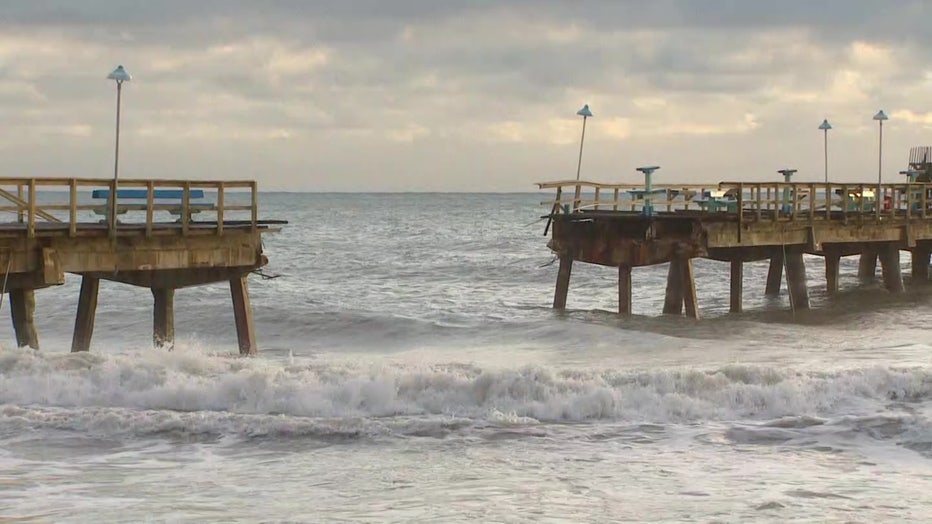 Elsewhere on Florida's Atlantic Coast, some beachfront properties in Volusia County are on the verge of collapsing into the ocean due to beach erosion.

Nicole washed away the remaining protections for a stretch of properties that lost their seawall during Hurricane Ian only weeks before. In Daytona Beach Shores, surging ocean water threatened the foundations of at least a dozen high-rise condos and houses.

These home sin Wilbur-By-The-Sea in Volusia County are on the brink of collapsing into the ocean after beach erosion caused by Nicole.

Krista Dowling Goodrich, who manages 130 rental homes in Daytona Beach Shores as director of sales and marketing at Salty Dog Vacations, witnessed the beachfront disappear behind some of the properties as evacuations were underway.

"While we were there the whole backyard just started collapsing into the ocean. It went all the way up to the house," she said. The water also compromised the remaining land between a row of tall condominium buildings nearby, she said.

"These were the tall highrises. So the people who wouldn’t leave, they were physically forcing them out because it’s not safe," Goodrich said. "I’m concerned for the infrastructure of the area right now because once the seawalls are gone, they’re not going to just let people go back in ... there will be a lot of people displaced for a while."