Truck driver comes to the rescue of raccoons stuck in dumpster

BRADENTON, Fla. - This family of raccoons really lived up to their "trash panda" nickname.

Robert Acton was making an early morning stop on his delivery route at a Bradenton business Friday when he heard a rustling noise coming from the dumpster.

When he peered inside, he discovered 10 young raccoons digging through the trash.

But while they were able to get into the dumpster to forage, the garbage inside wasn't high enough to allow them to get back out.

"Their momma taught them to get in the trash and they shouldn't have," Acton told FOX 13. 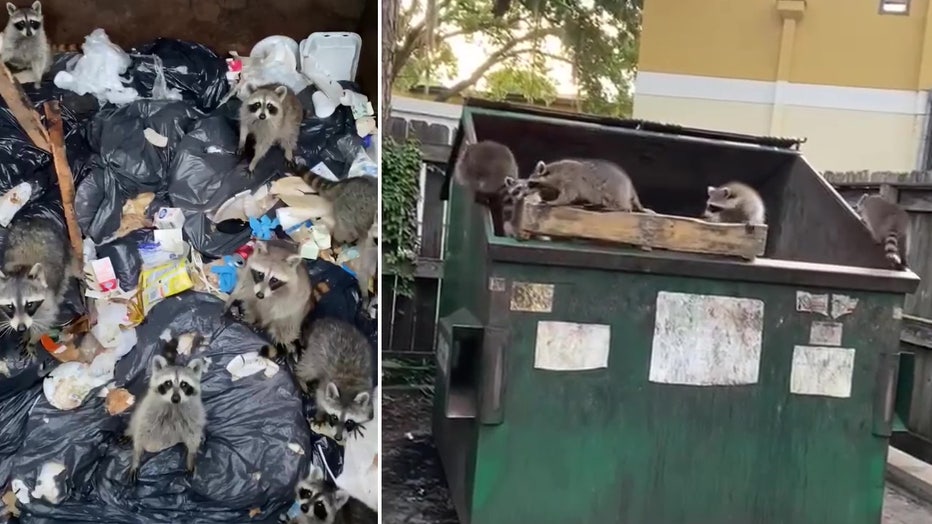 Acton grabbed a pallet from his truck and placed it inside the dumpster, giving the family of raccoons the ability to climb out.

He recorded video showing the animals quickly scampering out of the bin.

He said it isn't the first time he's rescued these raccoons either. Last week, he could hear noises coming from the same dumpster.

"There must've been 20 of them, and they got in but couldn't get out," he recalled.

He put a board in, allowing them to clamber up to safety.

Acton said he came to their rescue twice because he didn't want them to get hurt.

"We should always be kind to Mother Nature, so I'm going to help these little guys," he said.  "I'd hate to think of a compactor coming and throwing them in the back, that wouldn't be good."