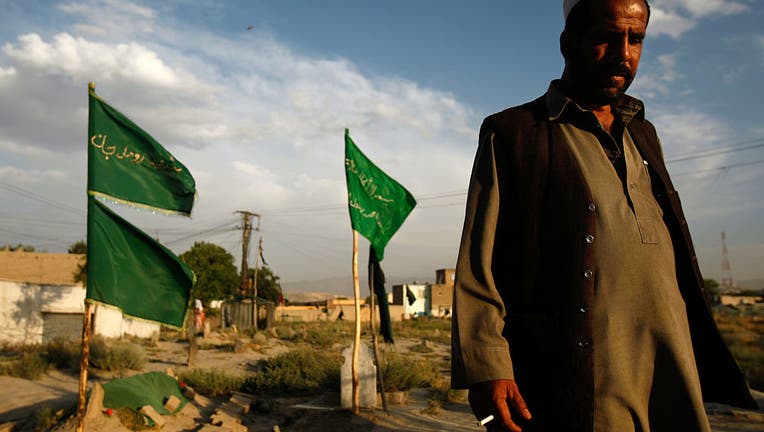 FILE - Tribal elder Mohammed Shafi stands in the Yaka Toot cemetary near the grave of Romal, 22, who was killed by Blackwater (now known as Xe) security forces in an incident that enraged area residents. (Rick Loomis/Los Angeles Times via Getty Images)

WASHINGTON - The courtroom monitors carried the image of a smiling 9-year-old boy as his father pleaded for the punishment of four U.S. government contractors convicted in shootings that killed that child and more than a dozen other Iraqi civilians.

"What’s the difference," Mohammad Kinani al-Razzaq asked a Washington judge at an emotional 2015 sentencing hearing, "between these criminals and terrorists?"

The shootings of civilians by Blackwater employees at a crowded Baghdad traffic circle in September 2007 prompted an international outcry, left a reputational black eye on U.S. operations at the height of the Iraq war and put the government on the defensive over its use of private contractors in military zones. The resulting criminal prosecutions spanned years in Washington but came to an abrupt end Tuesday when President Donald Trump pardoned the convicted contractors, an act that human rights activists and some Iraqis decried as a miscarriage of justice.

The news comes at a delicate moment for the Iraqi leadership, which is trying to balance growing calls by some Iraqi factions for a complete U.S. troop withdrawal from Iraq with what they see as the need for a more gradual drawdown.

"The infamous Blackwater company killed Iraqi citizens at Nisoor Square. Today we heard they were released upon personal order by President Trump, as if they don’t care for the spilled Iraqi blood," said Saleh Abed, a Baghdad resident walking in the square.

The United Nations' Human Rights office said Wednesday that it was "deeply concerned" by the pardons, which it said "contributes to impunity and has the effect of emboldening others to commit such crimes in the future." The Iraqi Foreign Ministry said the pardons "did not take into account the seriousness of the crime committed," and that it would urge the U.S. to reconsider.

Al-Razzaq, the father of the slain boy, told the BBC that the pardon decision "broke my life again."

Lawyers for the contractors, who had aggressively defended the men for more than a decade, offered a different take.

They have long asserted that the shooting began only after the men were ambushed by gunfire from insurgents and then shot back in defense. They have pointed to problems with the prosecution — the first indictment was dismissed by a judge — and argued that the trial that ended with their convictions was tainted by false testimony and withheld evidence.

"Paul Slough and his colleagues didn’t deserve to spend one minute in prison," said Brian Heberlig, a lawyer for one of the four pardoned defendants. "I am overwhelmed with emotion at this fantastic news."

Though the circumstances of the shooting have long been contested, there is no question the Sept. 16, 2007, episode — which began after the contractors were ordered to create a safe evacuation route after a car bomb explosion — was a low point for U.S.-Iraqi relations, coming just years after the Abu Ghraib torture scandal.

The FBI and Congress opened investigations, and the State Department — which used the Blackwater firm to provide security for diplomats — ordered a review of practices. The guards would later be charged in the deaths of 14 civilians, including women and children, in what U.S. prosecutors said was a wild, unprovoked attack by sniper fire, machine guns and grenade launchers against unarmed Iraqis.

Robert Ford, who served as a U.S. diplomat in Iraq over five years, met with the widows and other relatives of the victims after the killings, handing out envelopes of money in compensation and formal U.S. apologies — though without admitting guilt since investigations were ongoing.

"It was one of the very worst occasions I can remember in my time" in Iraq, said Ford, who teaches at Yale University. "That was just horrible. We had killed these people’s relatives and they were still terribly grieving."

The widows mostly took the envelopes silently. Some of the adult male relatives of those killed spoke up, bitterly. "How could you do this? We must have justice," Ford recounted in an interview Wednesday. 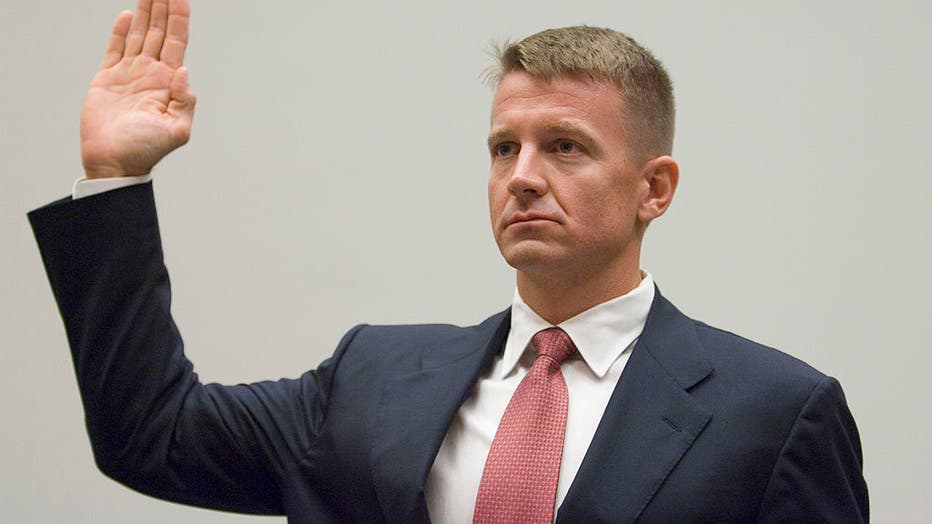 FILE - Erik Prince, chairman of the Prince Group, LLC and Blackwater USA, is sworn-in during the House Oversight and Government Reform Committee hearing on "Private Security Contracting in Iraq and Afghanistan," focusing on the mission and performanc (Bill Clark/Roll Call/Getty Images)

Adding to the angry fallout among Iraqis was the involvement of Blackwater, a security firm founded by Erik Prince, a former Navy SEAL who is a Trump ally and brother of Education Secretary Betsy DeVos. The company had already developed an unfavorable reputation for acting with impunity, its guards frequently accused of firing shots at the slightest pretext, including to clear their way in traffic.

A review of Blackwater’s own incident reports in 2007 by House Democrats found Blackwater contractors reported they engaged in 195 "escalation of force" shootings over the preceding two years — with Blackwater reporting its guards shooting first more than 80% of the time.

The 2007 killings in the Baghdad traffic circle were among many attacks, large and small, hitting civilians that served to turn even some initial Iraqi supporters of Saddam Hussein's overthrow against Americans. In 2005, for instance, Marines were accused of killing 24 unarmed men, women and children in the western town of Haditha in anger over a car bomb attack. U.S. military prosecutions in those killings ended with no jail sentences.

The case against the Blackwater guards ping-ponged across courts in Washington, with a federal appeals court at one point overturning the first-degree murder conviction of one defendant, Nicholas Slatten, and sharply reducing the prison sentences of the three others. All four were in prison when the pardons were issued.

The guards defiantly asserted their innocence at their 2015 sentencing hearing, with Slough stating that he felt "utterly betrayed by the same government I served honorably." Another defendant, Dustin Heard, said he could "not say in all honesty to the court that I did anything wrong."

The judge rejected that characterization, saying the "overall wild thing that went on here just cannot ever be condoned by the court."

Besides the legal impact, there could potentially be diplomatic and strategic consequences as well as Iraq assesses the U.S. military presence there.

In Iraq, said Ford, the former diplomat, the pardons will "necessarily give some ammunition to those who say get the Americans out now."