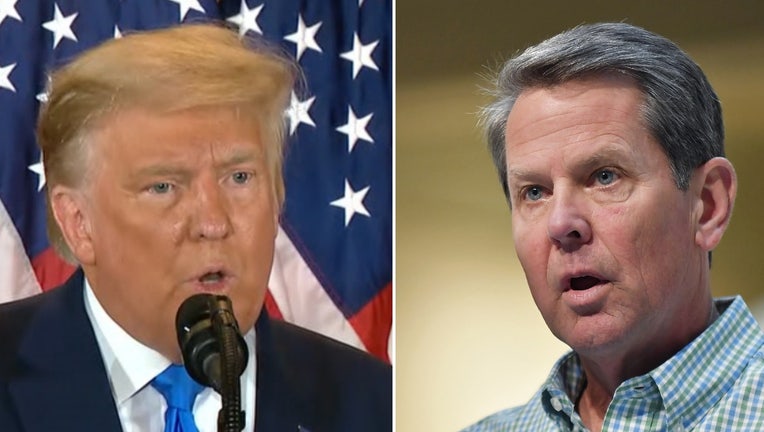 ATLANTA - President Donald Trump said Sunday he was “ashamed” for endorsing the Republican governor of Georgia after he lost in the state to Democrat Joe Biden.

Trump has seethed over losing the southern state, which hadn’t voted for a Democrat for president in nearly 30 years.

Trump said on Fox News that Gov. Brian Kemp has “done absolutely nothing” to question the state’s results. Trump has made baseless accusations that illegal votes cost him the election in Georgia and beyond. His legal challenges have failed in several states.

On Monday, Trump continued focusing on Kemp, calling him "hapless" and asking why he didn't "use his emergency powers, which can be easily done, to overrule his obstinate Secretary of State."

"It will be a 'goldmine' of fraud, and we will easily win the state," Trump said.

Kemp's office responded to Trump's claims, releasing a statement that said, "Georgia law prohibits the Governor from interfering in elections."

"The Secretary of State, who is an elected constitutional officer, has oversight over elections that cannot be overridden by executive order," a spokesperson for Kemp said. "As the Governor has said repeatedly, he will continue to follow the law and encourage the Secretary of State to take reasonable steps - including a sample audit of signatures - to restore trust and address serious issues that have been raised.”

The president had previously attacked Secretary of State Brad Raffensperger, calling him an "enemy of the people."

Raffensperger responded with an op-ed defending his job performance and his conservative credentials, saying that the president "refused to accept the facts" of the results.

In this month’s presidential contest, Biden beat Trump by about 12,670 votes.

In January, the state will decide whether the GOP retains control of the U.S. Senate when voters decide two run-off Senate races.

Democrats hope for two other upset victories in twin Senate races on Jan. 5 against Republican office holders. That would deny Republicans their majority, keeping the GOP with 50 seats, while Vice President-elect Kamala Harris would be available for tie-breaking votes.

Democrat Jon Ossoff is challenging Sen. David Perdue while Rev. Raphael Warnock takes on Sen. Kelly Loeffler. No candidate won at least 50% of the vote share in this month's election, leading to the head-to-head runoffs.

Ossoff said Sunday that a Republican-controlled Senate will hit the Biden administration with the same “obstructionism” it mounted against former President Barack Obama.

“It will be paralysis, partisan trench warfare,” he told CNN. “At a moment of crisis, when we need strong action.”

Loeffler on Fox News said GOP victories would be a “firewall to socialism" and the Democratic policies of Senate Minority Leader Chuck Schumer. It is Loeffler's first election cycle after Gov. Kemp appointed her to the seat in January when her predecessor resigned.

Trump on Saturday plans to arrive in the state he lost to campaign for the GOP incumbents.

“We're making sure that Georgians are fired up to turn out to vote,” Loeffler said. “If we vote, we will win this election.”

FOX 5 Atlanta contributed to this report.