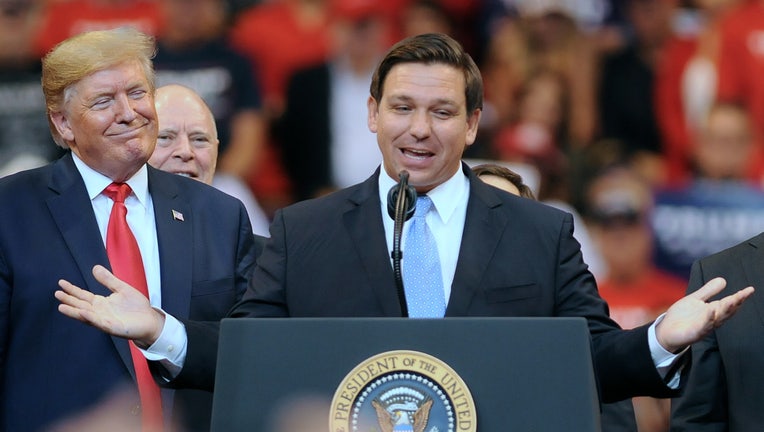 President Donald Trump looks on as Florida Governor Ron DeSantis speaks during the Florida Homecoming rally at the BB&T Center on Nov. 26, 2019. (Photo by Paul Hennessy/SOPA Images/LightRocket via Getty Images)

CONROE, Texas - There was something different next to the "TRUMP WON!" T-shirts, the "MAKE AMERICA GREAT AGAIN" hats and the "LET’S GO BRANDON" flags for sale at former President Donald Trump’s recent Texas rally: a collection of "DeSantis 2024" bumper stickers.

Nikki Rye, who lives in Florida and has been selling Trump gear at his events since 2015, said the merchandise hyping her state's Republican governor, Ron DeSantis, "is a very, very sought-after item." Beyond the stickers, a life-size cutout of DeSantis stood at one side of her shop, with Trump flanking the other.

As Trump aims for a political comeback, the DeSantis memorabilia signaled a shift emerging among the MAGA faithful. While the vast majority of the more than two dozen people interviewed at his rally at a Texas fairground cheered the prospect of another Trump White House bid, some began to concede that there might be better options.

And for anyone toying with a Trump alternative, DeSantis topped the list.

A new Suffolk University/USA Today poll released Tuesday shows a tight margin between the two among Florida Republicans. Trump leads DeSantis 47% to 40% -- with a 7.4% margin of error.

They were people like Kim Mitchell, 62, who lives in Canyon Lake, Texas, and was overjoyed to be seeing Trump in person. She and her husband have been longtime supporters; a Trump flag hangs proudly in his automotive garage. And if Trump goes through with another run, they both say they'll support him.

But Mitchell said she could see the benefits of a less polarizing alternative.

"You know, there’s several people out there that seem to have the same beliefs that he does. And people don’t hate them," she said, blaming Biden’s victory on a combination of election fraud — which election officials and courts have rejected — and the visceral dislike Trump inspires. "I hate to say that because I feel like I’m being disloyal."

But she's not alone.

A recent poll from The Associated Press-Center for Public Affairs Research found that while 71% of Republicans have a favorable opinion of Trump, a smaller percentage — 56% — want him to run again in 2024. The poll found 44% of Republicans do not want Trump to run.

Meanwhile, a recent NBC poll found that, by a 20-point margin, Republicans now identify more as supporters of the Republican Party than supporters of Trump — a reversal from the sentiment before the 2020 election.

Longtime GOP pollster Frank Luntz, who has conducted focus groups of voter opinion, said Republicans have fractured into three distinct blocs: those who have moved on from Trump, those who "will follow him off a cliff," and those who "really appreciate him, follow him, are still strongly favorable towards him," but are looking for another option.

"He still has a core of somewhere between one-third and 40% that will vote for him no matter what," Luntz said. "But it is now a minority. It was the majority up until six months ago. But it is now the minority."

The cracks in support are forming as Trump often appears more interested in re-litigating the 2020 election than focusing on issues affecting voters' daily lives, such as inflation. That could give an opening to someone like DeSantis, who has branded himself in Trump's mold, but has less baggage in national politics.

"I’ve been hearing about that DeSantis guy. He would be a good next one to run," said Kathy Miguez, 58, who lives in Dayton, Texas, and works in a grocery store. "From what I hear, he’s a lot like Trump."

For the last two years, DeSantis has deftly used the COVID-19 pandemic as a springboard to GOP stardom by portraying Florida as a beacon of freedom, even as public health experts have slammed as reckless and dangerous his hostility to basic public health precautions.

He has leaned further into policies that energize the GOP base as he runs for reelection, pledging to create a law enforcement agency to investigate alleged election crimes and pushing a bill that would prohibit schools and businesses from making white people feel "discomfort" when they teach students or train employees about discrimination.

Representatives for Trump and DeSantis did not respond to requests for comment for this story. But people close to the former president say he has been keeping a close eye on the governor, even as both men have dismissed talk of tension as a media creation.

Trump, who credits himself for DeSantis' win as governor, has been miffed by DeSantis' refusal to rule out a 2024 run if Trump moves forward, according to people familiar with his thinking.

The gamesmanship recently bubbled into the open, with Trump slamming politicians like DeSantis who refuse to disclose whether they have received COVID-19 booster shots as "gutless." DeSantis, in turn, said one of his biggest regrets in office was not speaking out louder against the COVID-19 precautions Trump urged in the early days of the pandemic. Trump has since largely avoided mentioning vaccinations, spending time railing against mandates instead.

Trump is still the overwhelming favorite among GOP voters and all signs suggest the 2024 nomination is his if he wants it. His political committee announced Monday that it has more than $122 million cash on hand, after raising more than $50 million in the second half of last year. And he still manages to draw crowds of many thousands to remote fairgrounds more than a year after leaving elected office.

But up until now, Trump has maintained a vise-like grip on the party’s base, making any cracks in support notable. The openness to alternate candidates underscores how Trumpism is no longer a cult of personality about one man, but a larger movement that includes candidates like the conspiracy-mongering Rep. Marjorie Taylor Greene of Georgia, who have embraced Trump's policy positions and replicated his attention-grabbing tactics.

That includes, for now, DeSantis, whom many see as a potential Trump 2024 running mate and a 2028 presidential contender.

"I think Trump is paving a way to open it up for DeSantis to run in 2028," said Thor Pearson, 32, who lives in El Paso. "And I would be absolutely happy because DeSantis is a great Republican. I think he’s doing everything right,"

Of course, there are others on the fringes, like a woman who insisted Trump would be reinstalled as president "imminently." Others maintain, counter to reality, that he is currently the president of the United States.

"We’re hoping. We’re praying," he runs in 2024, said Janice Shelton, 55, who lives in Austin and said Trump is the best option because "he’s already tried and true."

"It’s a no-brainer. He’s 100% going to run," echoed Jonathan Riches, 45, of Tampa, Florida, who was attending his 41st Trump rally after sleeping in his rental car overnight. Riches said he would support any future candidate who receives Trump's endorsement, but believes DeSantis "will be president one day, for sure."

"I do think that Trump is going to hand the baton to him," he said, adding that that "could be possible in 2024."

And many maintain that Trump is the best possible candidate.

"We like Ron DeSantis. ... But to get us out of the hole that we’re in now, I think we need Trump to run again," said Susan Roland, 63, who lives in Sugarland, Texas, and was among the hundreds of Trump supporters who protested outside the U.S. Capitol during the Jan. 6 insurrection.

"I think he’s the only one with the intestinal fortitude to put our country back," echoed her husband, Perry, 62.

Looking forward, said Mitchell of Canyon Lake: "I feel that Donald Trump will do what’s best for our nation. And if it’s not him running for president, it’s him being very involved in what happens."

"It has to be somebody that truly believes in Trump and that will listen to Trump, even if he’s just whispering in their ear and telling them," she added. "I like to think of Trump as being the one in the back, you know, pushing everybody up."