ATLANTA - As the United States approached one year since the Jan. 6 riot at the Capitol, House Speaker Nancy Pelosi painted a triumphant picture of the country’s democracy.

But if you ask Jimmy Carter, the nation’s 39th president, he’ll paint a picture of a fragile victory — one that still hasn’t been fully secured with the many of the country’s democratic institutions still in jeopardy.

"Our great nation now teeters on the brink of a widening abyss. Without immediate action, we are at genuine risk of civil conflict and losing our precious democracy," Carter said in an op-ed originally published in The New York Times. "Americans must set aside differences and work together before it is too late."

As Congress met last Jan. 6 to certify the results of the 2020 presidential election, a large mob of supporters of former President Donald Trump stormed the Capitol in an attempt to overturn President Joe Biden’s victory.

Hundreds have since been arrested for the crimes. Carter and all other former living presidents from both political parties condemned the attack and affirmed the legitimacy of the election results.

He said after Jan. 6, there was a brief hope that the insurrection would drive the nation towards addressing its "toxic polarization."

But the former Democratic president said that’s not what has happened. He accused politicians in states like Georgia, Florida and Texas of embracing election fraud falsehoods, enacting laws that empower partisan legislatures to intervene in election processes.

"Promoters of the lie that the election was stolen have taken over one political party and stoked distrust in our electoral systems," Carter said. "These forces exert power and influence through relentless disinformation, which continues to turn Americans against Americans."

After his presidency, Carter founded The Carter Center in Atlanta — which he said works to promote free, fair and orderly elections across the globe.

"I now fear that what we have fought so hard to achieve globally — the right to free, fair elections, unhindered by strongman politicians who seek nothing more than to grow their own power — has become dangerously fragile at home," Carter said.

Carter pointed to surveys of Americans that show an increasingly pessimistic view of American life. He said the Survey Center on American Life found 36% of Americans, nearly 100 million adults across the political spectrum, believe "the traditional American way of life is disappearing so fast that we may have to use force to save it."

And he pointed to another survey published by The Washington Post that roughly 40% of Republicans believe violent action against the government is sometimes justified.

"For American democracy to endure, we must demand that our leaders and candidates uphold the ideals of freedom and adhere to high standards of conduct," Carter said.

The 97-year-old offered the following solutions to the country’s political divide. He said the first step is for citizens to accept fundamental constitutional principles and norms of fairness, civility and respect for the rule of law, regardless of their political beliefs.

"Citizens should be able to participate easily in transparent, safe and secure electoral processes," he wrote.

Second, he called for a push to ensure the security and accessibility of our elections and the public confidence in the results. 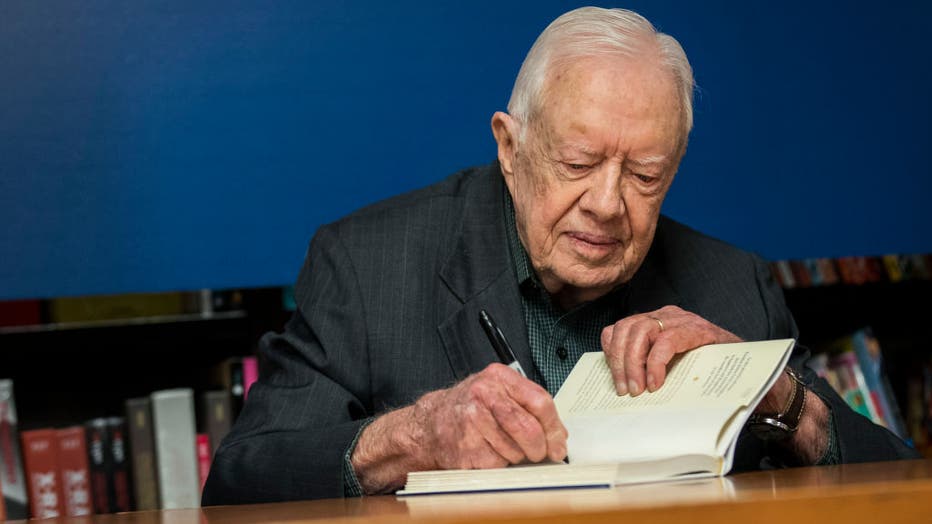 Former U.S. President Jimmy Carter signs a copy of his book 'Faith: A Journey For All' at a book signing event at Barnes & Noble bookstore in Midtown Manhattan, March 26, 2018, in New York City. (Photo by Drew Angerer/Getty Images))

"We must focus on a few core truths: that we are all human, we are all Americans and we have common hopes for our communities and our country to thrive," he said.

Fourth, he denounced the presence of violence in politics, calling on Americans to pass or strengthen laws that reverse the trends of character assassination, intimidation and armed militias at events.

"We must protect our election officials — who are trusted friends and neighbors of many of us — from threats to their safety," Carter stressed.

Finally, Carter called for the end of disinformation, especially on social media platforms.

"We must reform these platforms and get in the habit of seeking out accurate information," Carter said.