BRUSSELS - Fresh from supportive summits with allies, Joe Biden declared himself ready Tuesday to take on Russia’s Vladimir Putin in far more confrontational talks — a climactic finish to the most important week of meetings in his young presidency.

Biden meets for his first talks as president with the Russian leader on Wednesday, in what's expected to be roughly a half-day of discussions between the two leaders and aides behind closed doors. That's after spending much of a weeklong European trip — the foreign policy highlight of his presidency so far — working to strengthen ties with like-minded partner nations in order to better deal with rivals Russia and China.

A reporter soon after Biden's arrival in Geneva on Tuesday shouted out a question on whether he was ready for Wednesday's talks. "I am always ready," Biden answered.

The American leader reached Geneva following rounds of cordial elbow bumping, grinning photo sessions and close consultations with global leaders at the Group of Seven, NATO and U.S.-European Union summits. He secured a series of joint communiques expressing concern over Russia and China, and was at the EU on Tuesday to preside over the announcement of a breakthrough easing a long-running U.S. aircraft trade dispute with that bloc.

As for Russia, the U.S. and the EU declared they "stand united in our principled approach" to the longtime rival, "ready to respond decisively to its repeating pattern of negative behavior and harmful activities." 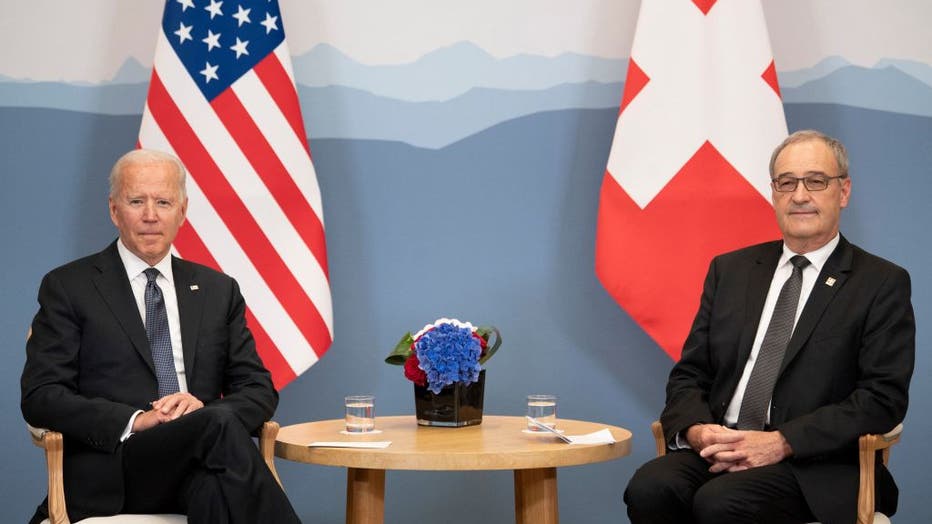 Swiss president of the Swiss confederation Guy Parmelin (R) and US President Joe Biden attend a bilateral meeting in Geneva on June 15, 2021. (Photo by BRENDAN SMIALOWSKI/AFP via Getty Images)

Biden’s European tour has aimed to restore U.S. partnerships that were damaged under former President Donald Trump, who openly invited what American intelligence services said was Russian interference in U.S. political campaigns, and who sought out Putin and other autocrats he saw as strong.

In line with the chilly-so-far Biden-Putin relationship — Putin's government responded with indignation earlier this year after Biden said he considered the Russian a "killer" — the two men plan neither lunch nor dinner together, and no joint press conference after, in what's expected to be their four to five hours together.

That's in contrast to this week's G-7 session hosted by British Prime Minister Boris Johnson, where the allies and their spouses held a beach barbecue and round after round of "family photos."

According to a senior administration official granted anonymity to disclose internal discussions, Biden is hoping to find small areas of agreement with the Russian president, including potentially returning ambassadors to Washington and Moscow.

That and other diplomatic issues, including the tit-for-tat expulsions of diplomats and closure of consulates, will be high on the agenda for both sides.

The U.S. ambassador to Russia, John Sullivan, a rare holdover from the Trump administration, and Anatoly Antonov, the Russian ambassador to Washington, will both be in Geneva for the summit.

The two men departed their posts earlier this year as part of what both Russia and the United States describe as an all-time low in the two countries' relationship.

In addition, Russia has complained for years about its eviction and loss of consulates in San Francisco and Seattle and other facilities in Maryland and New York. The U.S., meanwhile, has been forced to close its consulate in St. Petersburg and is now facing the loss of Russian citizens employed by its embassy in Moscow, which will significantly reduce the consular services it is able to provide.

Deal reached in Airbus-Boeing trade dispute between US, EU

The U.S. and European Union reached a deal to end a battle over subsidies to rival plane makers Boeing and Airbus, a dispute dating back to 2004.

Biden also is looking to make progress on a new arms control agreement between the two nations, which agreed to a five-year extension of the remaining current pact in January.

Putin foreign affairs adviser Yuri Ushakov sought to moderate expectations for the summit, but he strongly emphasized its importance given the current tensions.

"It’s the first such meeting that takes place at a time when the bilateral relations are extremely bad," he said. "Both parties realize it’s time to start dealing with the issues that have piled up."

Biden plans to raise issues ranging from cyberattacks to Putin’s treatment of Russian opposition leader Alexei Navalny, who was poisoned and later jailed in what was seen as political retribution for exposing alleged Kremlin corruption and leading an anti-Putin protest movement.

In Geneva, a couple dozen Navalny supporters turned out in a sun-drenched square on Tuesday, and murals of a smiling Navalny holding his fingers in a heart shape, with the words "Hero of our time" in French, have popped up around the Swiss city in recent days. Those reference a similar mural in St. Petersburg, Russia, that authorities quickly covered over.

Syria, where Russia is threatening to close the last humanitarian crossing into that country, also is on the leaders' agenda.

President Biden took part in his first in-person North Atlantic Treaty Organization (NATO) summit on Monday. The president traveled to Brussels for the NATO meeting after he wrapped up a three-day meeting with the Group of Seven nations on Sunday

Biden this week called Putin a "worthy adversary" and has said he is hoping to find areas of cooperation with the Russian president. But he also warned that if Russia continues cyberattacks and other aggressive acts toward the U.S. "we will respond in kind."

Biden goes into Wednesday's talks bolstered not only by the supportive words of European allies but by the tangible news of a major breakthrough in a 17-year trade dispute centered on rival subsidies for aircraft manufacturers.

At almost every stop this week, the president repeated his message that "America is back," in hopes of convincing both allies and rivals that the U.S. is engaged and strong internationally after Trump’s isolationist presidency and the political upheaval that peaked last January in violence at the U.S. Capitol.

"I don’t care about charming Europe and thinking you’re one of them," McCarthy said, a day after Biden referred to Republicans as "fractured."

The EU and U.S. agreed Tuesday to set up what their statement called a "high-level dialogue" on Russia to counter what they said was Moscow’s drift into deeper authoritarianism and anti-Western sentiment.

At the same time, the 27-nation EU is divided in its approach to Moscow. Russia is the EU’s biggest natural gas supplier, and plays a key role in international conflicts and key issues, including the Iran nuclear deal and conflicts in Syria and Libya.

But the hope is that Biden’s meeting with Putin might pay dividends, and no one in Brussels wanted to undermine the show of international unity that has been on display at the G-7 and NATO summits, according to EU officials.