TAMPA, Fla. - With Florida's legislative session wrapping up next Friday, lawmakers have some big decisions to make, including those impacting college education.

Tuesday, a group of University of South Florida students hit the sidewalk to voice concerns over proposed changes to Bright Futures scholarships and university budget cuts.

"Florida says cut back, we say fight back" chanted the students along busy Fowler Avenue...We need to let the state government know we won't stand for any attacks on education," said USF senior Enya Silva to the group.

Their first issue has to do with Bright Futures scholarships.

"I come from a very working-class family," said USF senior Taylor Cook. "I'm a first-generation college student as well. I don't think I would be here today if I didn't have Bright Futures."

This month, the State Senate passed a bill that would give the legislature power to defund the program, removing the existing requirement that it cover 100% or 75% of students' tuition, depending on their award level, and allowing lawmakers to decide how much funding is available in the state budget.

"In the future, we need to have the opportunity to look at bright futures just like we look at hospitals, the prison system, the education system," said State Sen. Kelli Stargel on April 8th. "We don’t know what our future priorities are going to be."

"USF step off it, put people over profit," the group chanted. 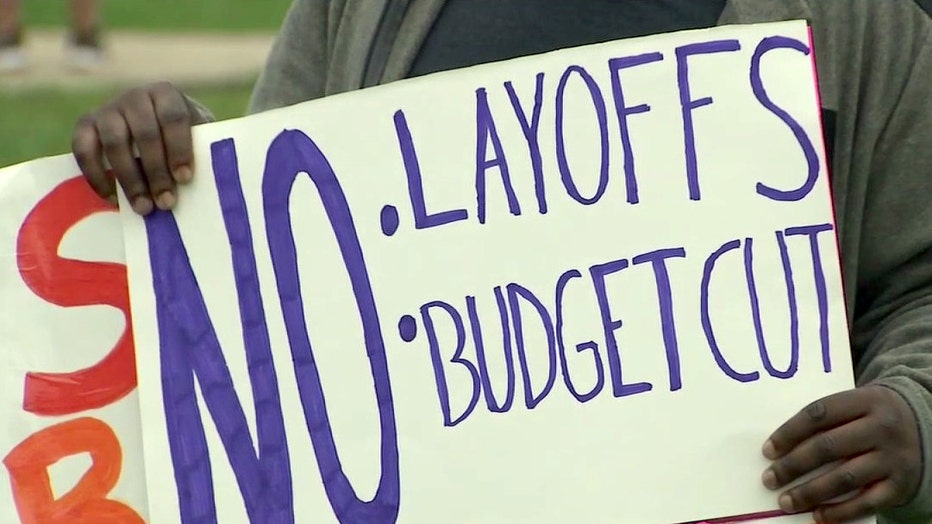 The Florida Board of Governors directed all state universities to prep for an 8.5% cut in state funding. For USF, that's $36.7 million.

"It would increase class sizes, it would put too much work on the faculty and professors and negatively affect our quality of education," said Silva.

Students say cuts ought to come from top administrators' salaries and, "I think they need to make cuts to the [campus] police department," Cook said.

In October, USF President Steven Currall said he'd take a voluntary 15% salary reduction with 6% to 10% cuts for the university's leadership team. Also in the plan is a 5% budget cut for campus police.

In a statement, the University said, "Through the budget process, USF leadership intends to minimize any impacts to student success and faculty while aligning financial resources with USF’s strategic priorities and aspirations."

Whatever cuts are made on the state level, students say education should be last.

"I think they're thinking about the short term more so than the long term and they really need to think through more, the consequences of these decisions," Silva said.

The fate of the Bright Futures bill is now in the hands of the State House. As for the proposed school budget cuts, the full extent will be determined once the state legislature agrees on a budget that is then signed by the Governor.