TAMPA, Fla. - It’s hard enough starting your own business, so the University of South Florida is hosting a supplier diversity event this week to knock down barrier for minority-owned businesses.

USF’s Suppler Diversity event is a business symposium to diversify the supply chain within USF but also with other Tampa Bay and Florida businesses. It will be held Friday for the first time in-person since 2019, and anyone can register to attend.

"It’s really important, because it gives our business owners the opportunity to meet the decision makers," said Terrie Daniel, the assistant vice president at USF’s Office of Supplier Diversity.

One of the minority-owned business owners who benefited from the event in the last five years was Chris Lawson, owner of CCS Marketing in Tampa.

"We help turn brands into businesses, that’s essentially what we do, everything from strategy, creative, web, social media, print production and promotional advertising," said Lawson.

He said they’ve even expanded to partnering with other shops for apparel, but the business had a tough start in 2007 after he moved from Chicago to Tampa.

"So the business plans that we had put in place was going out the window at that time," said Lawson, who said his business immediately went into survival mode for a few years before becoming profitable again. "[We’ve] been in Tampa since 2007. We got our first real opportunity in 2021."

Lawson said that one job came from USF’s supplier diversity event he attended in 2019.

"Our company has the exclusive contract to produce all printed and stationery items for USF," said Lawson. "We were able to secure a three-year contract with USF, and it started back in July 2021."

MORE: New collaboration pays off at USF and MacDill Air Force Base

It led to other opportunities with the Super Bowl, Ironman and nonprofits, he said. 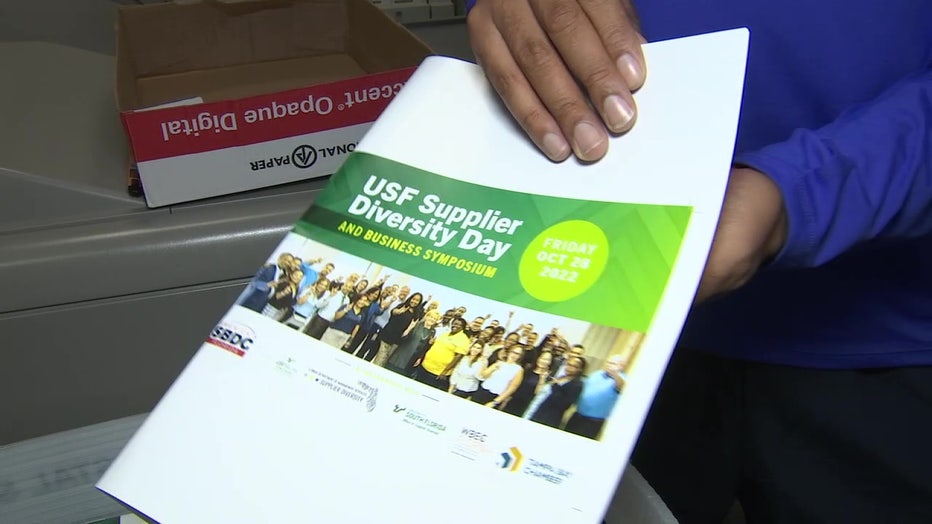 On Friday, the event will take place from 8 a.m. to 4 p.m. in the Marshall Student Center at the USF Tampa campus.

"We are actually focusing a lot on our Black-owned businesses for this symposium as well where we’ll have sessions on Blacks in technology," said Daniel.

The event will also focus on ways to overcome barriers minority business owners face, like getting a business funded.

"We’ll have banking institutions there to talk about access to capital," said Daniel. "It is so vitally important with the economic climate the way that it is today, for these businesses to make sure that they have the right resources in place to be able to play in this space."

The space gives USF a look at small businesses to hire for construction, janitorial services, food services, and other jobs. Other decision makers are searching for business to potentially hire for contracts too, including the state of Florida and Disney.

It gives a lift to small business when they need it.

"That’s what makes all of this worth it right. This is not just hard work. It’s heart work," said Daniel.

It's work Lawson said made a difference for his business.

"It gave a small business like ours exposure we would not have gotten in the past," said Lawson.