BRADENTON, Fla. - The Tampa Bay Coastal Ocean Model was designed by USF's College of Marine Science to track red tide.  Now the model is being used to forecast where nutrients from Piney Point will end up.

The leak and subsequent controlled release at Piney Point sent more than 200 million gallons of water filled with nutrients into Tampa Bay.

"What this model is doing is looking at where the material is going and how it’s diluting over time," explained Dr. Bob Weisberg with USF's OCean Circulation Lab. "The effluent is sloshing back and forth with the tides as the winds blow, it may cause it move to the north or south or spread out."

Right now the models show low concentrations have reached the waters off St. Petersburg and into the Gulf of Mexico. It's also been documented in the Little Manatee River and Manatee River. 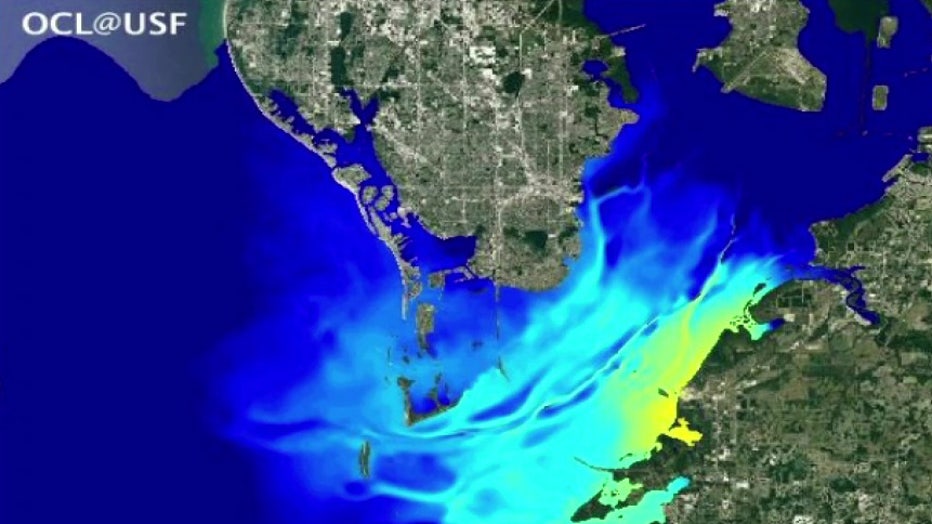 Dr. Weisberg said it could take months before the nutrients are flushed out of Tampa Bay.

"You can see that effluent has crossed the bay, it’s by St. Pete in low concentration and it will be a continued sloshing back and forth and a slow decrease as it spreads," he said.

The state expects to put more than $115 million toward closing the site of the former Piney Point phosphate plant where a reservoir leak set off a wastewater crisis in Manatee County.

The model will help researchers out in a number of ways. It will help direct where testing efforts needs to be focused and it will give them a look where we might see impacts.

"We don’t see any indication of anything toxic; it’s an assemblance of plant life that exists in the ocean and when you feed it a lot of nutrients, they take off just like in your garden," he continued.

From a boat outside Port Manatee, Dr. Randall Wells keeps a close eye on the water. He and others are tracking dolphins who live in the area to see how they've been affected by wastewater discharges from the old Piney Point fertilizer plant.

For those who make a living from Tampa Bay, the models bring a mix of feelings.

"It's helpful but it’s also disheartening because it kind of plays that worst-case scenario," said Rod Griffon, a commercial fisherman who lives near Piney Point.

If high counts of nutrients stay in Cockroach Bay and Bishop Harbor, he believes the impacts could be devastating.

"My concern is that it could potentially put us out of business for a year or two until everything bounces back," he said.

Environmental experts remain concerned about the Piney Point leak and its lasting impact on marine life. A team of USF scientists will head out on a research vessel Wednesday to collect water samples.

Griffon is still working on the water. He's moved away from the spill site and into waters that are clean and clear. He'll keep an eye on the forecast.

"We have no choice but to keep doing what we will be doing, but that will give us a good tool on what areas we need to focus on paying attention to seeing how bad it will be," he added.