BRADENTON, Fla. - For military veterans suffering from post-traumatic stress disorder (PTSD), overcoming trauma can be difficult. So can talking about it but a Bay Area veteran found an outlet in writing about his experiences.

Typing it out gives retired Army veteran James Rosone something he thought he might never find: relief.

"It's just an opportunity to unpack everything. You're just able to write it out and unpack it," Rosone said.

Rosone began searching for relief from PTSD after returning home from serving in a combat zone in Iraq for three and a half years. He worked as a human intelligence collector for the U.S. Air Force where he identified insurgent groups and interrogated terrorists.

"How do you go from a job where you are Jack Bauer doing Jack Bauer type stuff, hunting terrorists and come home and now you're Joe Nobody. That's really hard. That's a hard adjustment to do that," Rosone said. 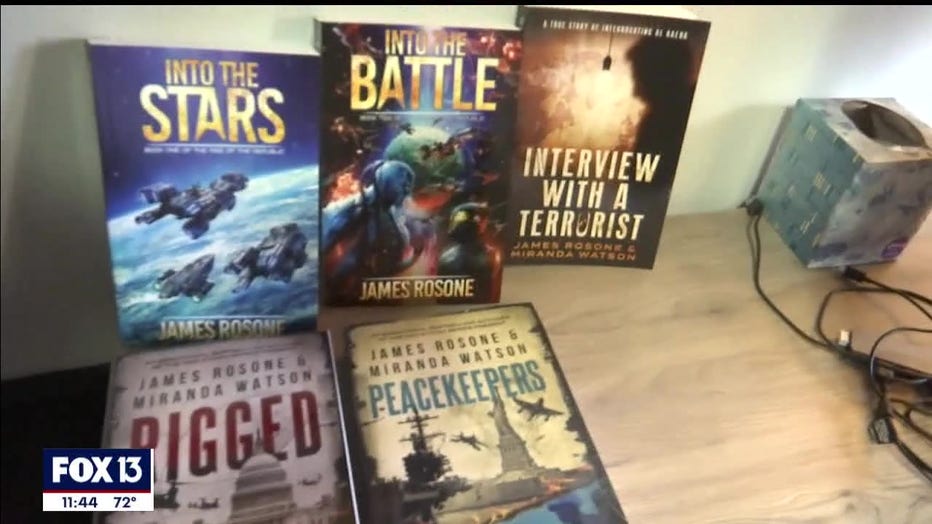 To help adjust, Rosone took up writing therapy after a counselor at the VA recommended it.

"You write out the scenes. You write out all the trigger events. Then I thought well heck why don't I write stories that I want to read," Rosone said.

"It's really nice to have some of the old person back. You know the person before they went away to war. I get to see him be a little bit more of himself. And what's really great is we've built something we can be proud of," Watson said.

Miranda and James say their booming book business has provided them with financial security, as well.

The best feeling Rosone and Watson get is from giving back. A portion of their book sales goes to Southeastern Guide Dogs, a Palmetto charity helping vets with PTSD.

Since they started writing, they've raised more than $15,000 for veterans charities.

Rosone encourages other veterans to write and recently helped one publish his first book.

"Find a new purpose. Find a new mission. If you have found one and it's working for you, see if that mission or new purpose might work for someone else," Rosone said.