Watch: Rocketcam views of the Artemis I launch

Here's what it was like aboard the Orion capsule as the SLS rocket lifted off. (NASA video)

CAPE CANAVERAL, Fla. - After yesterday’s stunning views of the moon from NASA’s Orion capsule, the agency will attempt another first: A near-constant live feed from a capsule in lunar orbit.

Space fans were already able to track the Artemis I mission’s progress in real time with simulated views of the spacecraft. But now, with the deep-space data relay network performing better than expected, NASA has set up a live video stream from the Orion capsule as it heads toward lunar orbit.

The uncrewed Orion capsule is six days into its test flight around the moon. As of Tuesday morning, it was over 208,000 miles from Earth and 31,000 miles from the moon after coming within 80 miles of the lunar surface Monday.

Earth is seen as a blue dot as the Artemis I Orion capsule approaches the moon. (NASA TV)

The capsule has cameras mounted on the ends of its four solar panels which act as selfie sticks of sorts, feeding back shots of Orion as it flies through space. NASA shared a few live views from those cameras during Monday’s close lunar pass – including a shot of ‘pale blue dot’ Earth – and now, they’ll do their best to keep the feed going.

"Our preflight predictions said we would not have enough bandwidth to downlink all of the files that we plan to do for critical telemetry as well as do live stream," Artemis I flight director Judd Frieling explained Monday evening. "As part of the testing of the system, we’re also testing out the deep-space network and so we’re kind of probing and seeing how far we can press those bandwidth limitations and it turns out we were able to live stream. So from this point forward, that’s going to be one of our priorities."

To put the bandwidth challenge into perspective, Frieling explained that a gigabyte of data – which would normally take about a minute to download from the International Space Station – has taken up to 90 minutes to download from Artemis I, though engineers have been able to cut that to 45 minutes so far. 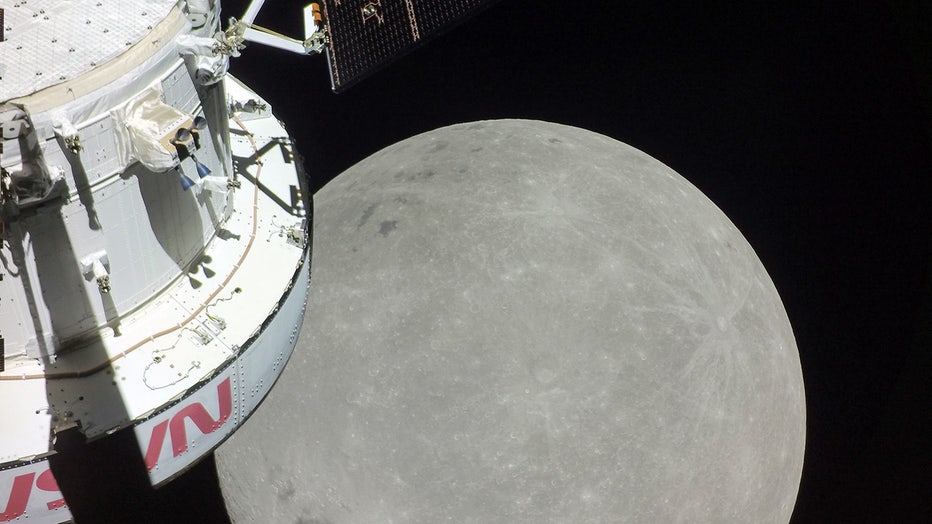 A portion of the far side of the Moon looms large just beyond the Orion spacecraft in this image taken on the sixth day of the Artemis I mission by a camera on the tip of one of Orion’s solar arrays. The darkest spot visible near the middle of the im

The video feed is a low-resolution view, but the spacecraft is taking and storing higher-resolution photos. NASA shared a handful of those Monday, but most will have to be retrieved after Orion returns to Earth next month.

Among those, the team hopes, will be great shots of the Apollo landing sites that they plan to take this week. 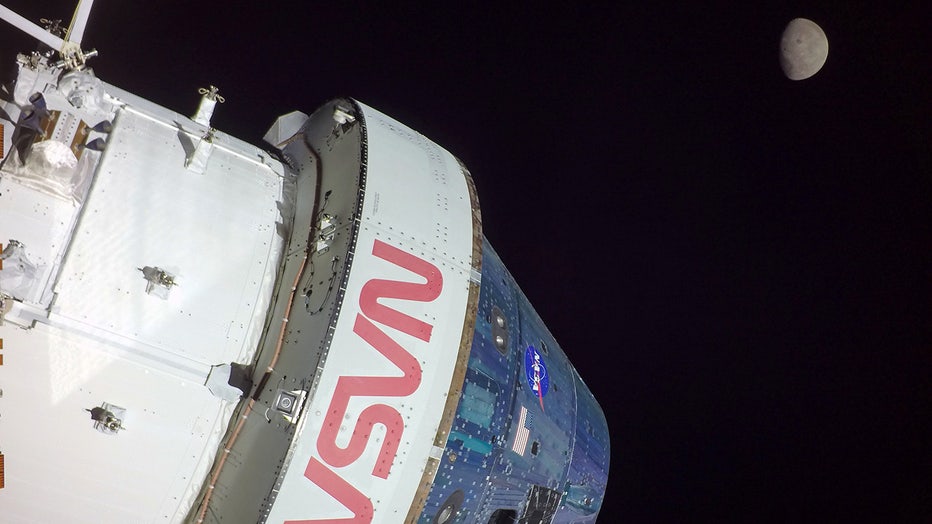 Taken on the fifth day of the Artemis I mission, this photo showing the Orion spacecraft with the Moon beyond was captured by a camera on the tip of one of Orion’s solar arrays. The spacecraft arrived at its closest approach to the moon the following

The Orion capsule is scheduled to fire its engines and enter a distant lunar orbit on Friday, where NASA will see how the spacecraft handles radiation and other challenges of being so far from Earth. In early December, the craft will begin heading back to Earth ahead of a fiery test of its heat shield.

The capsule will experience temperatures of up to 5,000 degrees as it enters Earth’s atmosphere at nearly 25,000 mph – a faster and hotter reentry than any other capsule. If all goes well, it will splash down in the Pacific, paving the way for a similar flight by astronauts in 2024.

After that, NASA hopes to send astronauts back to the lunar surface, including the first woman and the first person of color.

NASA's SLS rocket lifts off on the Artemis I mission. (FOX photo)