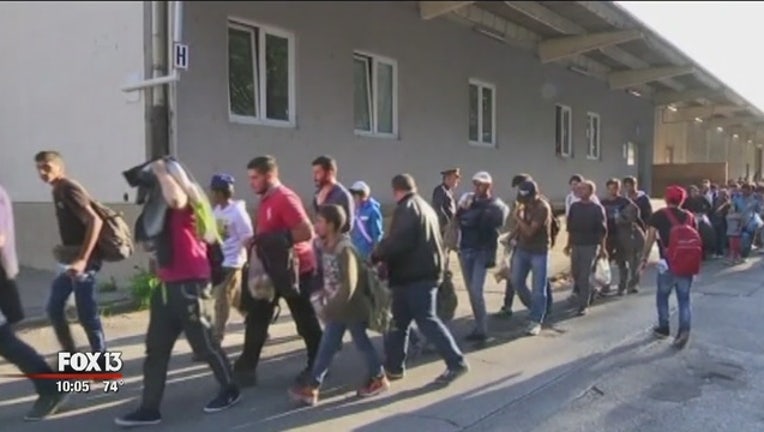 LANSING, Mich. (AP) — The White House sought Tuesday to reassure U.S. governors concerned about accepting Syrian refugees following the attacks in Paris, explaining during a conference call how the refugees are screened and prioritized for entry.

Of the 34 governors who participated in the 90-minute call, 13 asked questions, according to the White House. Senior officials on the call included President Barack Obama's Chief of Staff Denis McDonough and representatives from the Departments of Homeland Security, State and Health and Human Services, the FBI and the National Counterterrorism Center.

Administration officials have said screening for Syrian refugees includes an interview overseas, biometrics, fingerprinting and biographical investigations to determine if individuals are truly worthy of refugee status or if they pose security risks.

"The federal government reaffirmed that refugees go through the highest level of security screening of any category of traveler to the United States," Washington Gov. Jay Inslee, a Democrat, said in a statement. He added that the State Department prioritizes the most vulnerable groups of people and that half of all Syrian refugees are children.

But Arizona Republican Gov. Doug Ducey said there are legitimate questions about the screening process that remain unanswered.

"Arizona is entitled to a formal consultation under federal law, and this conference call did not meet that requirement," spokesman Daniel Scarpinato said.

More than half of governors, almost entirely Republicans, have raised concerns with refugee resettlement efforts in recent days. They want temporary delays while seeking more information about security checks or they are fighting outright any refugee resettlement in their states.

The federal government controls resettlement programs, however, and state authorities have no authority to bar refugees from moving to their jurisdictions.

Michigan Republican Gov. Rick Snyder found it helpful to "hear in much greater detail the work that has happened on the screening and security procedures and process," spokeswoman Sara Wurfel said. She said he asked federal officials for "more robust data" and an "enhanced flow of information." She declined to elaborate.

Snyder — who had bucked others in the GOP by calling more refugees to be placed in the state — has paused his efforts to take in more refugees than Michigan otherwise might have received following the attacks in Paris that killed at least 129, saying it is "prudent" and "common sense" to seek assurances about federal security procedures.

Matt Swenson, spokesman for Minnesota Democratic Gov. Mark Dayton, said he was reassured that no refugee resettlement initiative is underway "at this time" in the state.

In a statement, the White House said governors encouraged more communication from the administration to ensure that they can better respond to questions from the public about the refugee screening and resettlement process.

"I reiterated to my fellow governors my belief that when we give into fear and hatred the terrorists win," said Vermont Gov. Peter Shumlin, a Democrat who said he had faith in the screening process.

Follow David Eggert at http://twitter.com/DavidEggert00 . His work can be found at http://bigstory.ap.org/author/david-eggert