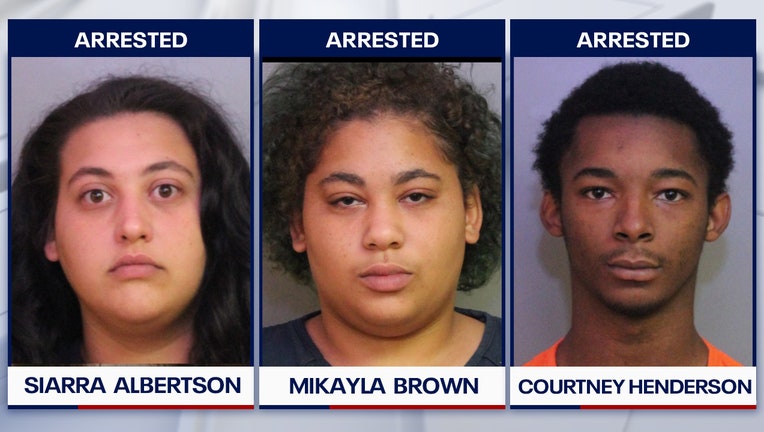 WINTER HAVEN, Fla. - Three people were arrested for stealing a man's vehicle after a victim spotted it sitting in a driveway just miles away from his own home, according to the Winter Haven Police Department.

Before midnight on Tuesday, the three suspects were walking along St. James Drive when they found two unlocked vehicles in a driveway. Two suspects burglarized the Hyundai, police said.

The keys to the victim's 2007 Dodge Durango were left inside, and the vehicle was stolen. The victim made the discovery around 2 a.m. when he woke up to head to work, detectives said.

Police said the victim reviewed his home surveillance footage, and spotted the three suspects rummaging through the Hyundai and stealing his Dodge vehicle. The police department received a report from the victim.

However, later that day, the victim contacted detectives once more after he found his vehicle parked in front of an apartment near Pickney Drive and Highway 92 West.

Detectives said the victim, and his relatives, noticed three individuals walking in the area who looked similar to the ones in the surveillance video. One of them was wearing a pair of Beats headphones that were stolen from the vehicle. The headphones were custom-made for the victim's wife and had unique markings on each side.

The victim monitored the trio until officers arrived.

The suspects, identified as 22-year-old Courtney Quentavus Henderson, 22-year-old Siarra Nicole Albertson, and 19-year-old Mikayla Shya'Ann Brown, were found at a home on Bass Circle, not far from where the vehicle was stolen, police said.

All three were arrested on several charges, including grand theft of a motor vehicle.