CLEARWATER, Fla. - If you’re planning a day at the beach, be sure to check red tide maps for the latest conditions on Bay Area beaches.

Red tide has been reported in varying concentrations along the shores of Pinellas, Hillsborough, Manatee, and Sarasota counties. It’s been a pretty different scene at the beaches as compared to the bay where it’s almost impossible to escape red tide and fish kills. But the concentrations vary from beach to beach and from day to day and officials aren’t seeing large amounts of dead fish wash ashore.

Use the following links to track red tide conditions and to read detailed updates about respiratory issues and fish kills:

Crews have been working around the clock to keep the beaches clean. Many tourists have said they’re taking things in stride and trying to make the best of their vacations.

"We are going to have a great time, move those dead fish out of the way and go play," said Janelle Maciaszeki, who is visiting from Chicago. 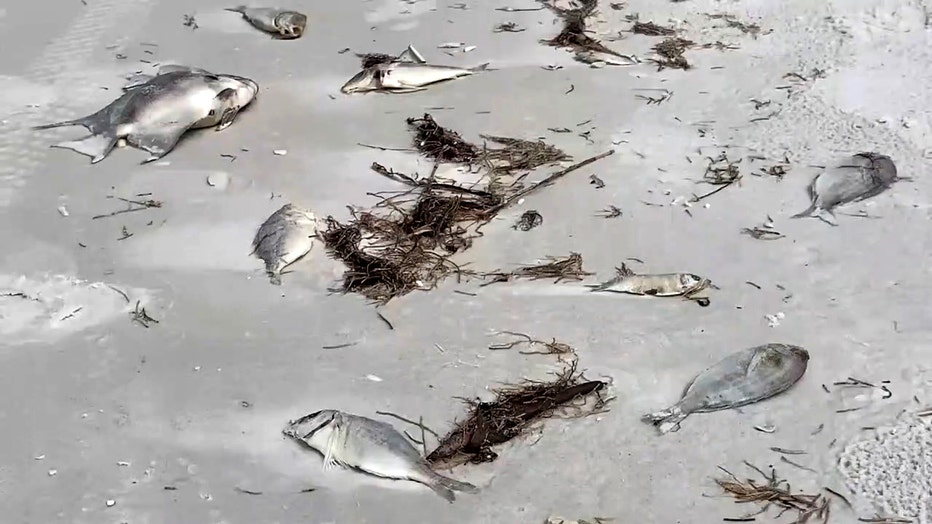 The problem is more dead fish is turning up every day, and marine scientists with the University of South Florida said there’s no way to tell when it will end.

They said a combination of factors stirred up the water in the bay and made the fish kills more severe. They said it’ll likely have a long-term impact on local areas since most of the fish dying off live near the coast and don’t migrate.

RELATED: Dead fish cause stink in St. Pete neighborhood after Elsa passes through

"Mostly what I've seen is primarily mullet and smaller fish, hardhead catfish, which is an oceanic catfish," explained Steven Murawski, a USF College of Marine Science professor. "We've also seen things like goliath grouper, young Goliath grouper, which is, you know, it's an animal, could be tremendously large size, but they're juveniles. They occupy the mangroves in the lower bay."

Scientists said red tide is a natural process that forms offshore in the Gulf of Mexico before floating closer to land, resulting in fish kills. So, the algae can’t be killed off. But they said people can help by adding less nitrogen to the water. Fertilizers, industrial run-off, and stormwater overflows are known to fuel algae blooms.