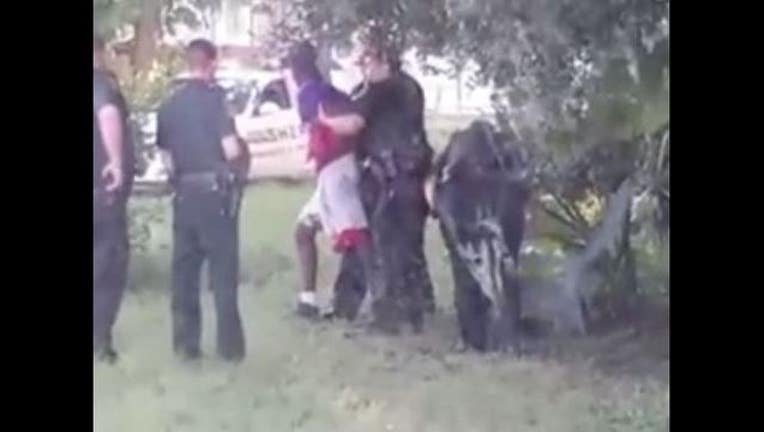 HIGHLAND CITY (FOX 13) - A quick-thinking woman turned the tables on a would-be carjacker Sunday night. She made it home safely. He, on the other hand, hit a few bumps in the road.

Employees at the Palace Pizza thought he looked a little strange.

"There was a guy lurking outside for a little bit," said employee Mitzi Poindexter.

He surely wasn't waiting for a slice. He had an appetite for crime.

A woman was parked outside Palace Pizza, waiting for her order, when she heard a tap at her window. There was a gun pointed at her.

"Next thing I know, I look over and he has a gun," Poindexter recalled. "He pointed it, I thought he a was breaking into the car. He wasn't. There was actually a person in the car."

Luckily, the door was locked. The woman in the driver's seat was about to take him for a ride.

"She throws it in reverse," said Polk County Sheriff Grady Judd. "She backs up, starts blowing her horn and actually flips him over the car, hits him with the car, and he takes off running. She did beautifully."

One after another, 911 calls came in. Neighbors directed deputies to the failed carjacker, running scared from yard to yard.

"He doesn't come out, we send the dog in and we safely take him in custody," Judd said. "Along his route, we find him with two black firearms that turned out to be what we believe to be BB guns."

Sheriff Judd says the 17-year-old suspect, barely old enough to drive, is connected to yet another carjacking from Friday night. Same shopping center, same gun, same tap on the window.

"We have stopped what would have been a troubling trend of events," Judd said.

The victim from Sunday night made it home safely.

"She was real shaken, she was pretty upset by it," Poindexter said.

Her quick thinking serves as a warning to would-be criminals: Not everyone will go down without a fight.

"He tried to carjack a car and it ended up, the victim jacked him over the hood and then we caught him," Judd added. "And, when he wouldn't come out, we gave him some more business. Nobody got hurt, bad guy is in jail, on to the next case."

Judd believes this suspect wasn't acting alone and they're now on the hunt for his partners in crime.

In the meantime, he says this 17-year-old committed adult crimes, so they're going to ask the State Attorney's Office to prosecute him as an adult.