A look back at the Notre Dame Cathedral fire

Ever since the French landmark was engulfed in flames that destroyed much of the structure's roof and felled its spire on April 15 last year, construction workers have toiled tirelessly to save the 13th-century relic by President Emmanuel Macron's promised five-year timeline.

PARIS - One year after a fire endangered one of Roman Catholicism's more cherished monuments, restoration of Paris’ Notre Dame Cathedral has been stymied by the coronavirus.

Ever since the French landmark was engulfed in flames that destroyed much of the structure's roof and felled its spire on April 15 last year, construction workers have toiled tirelessly to save the 13th-century relic by President Emmanuel Macron's promised five-year timeline, according to Agence France-Presse.

But as the coronavirus began to ravage the city, repair work on Notre Dame was stopped after already being delayed for months by contamination due to lead that melted from the roof.

A tangle of metal scaffolding that surrounded the cathedral before the fire, for restoration work on some of its statues, still needs to be removed after it melted together during the fire before a temporary roof can be installed to protect the interior.

Some of the debris has been removed from the nave, but more needs to be taken out of the vaulted roof.

The cathedral's organ also needs to be removed and cleaned.

Jean-Louis Georgelin, a French army general in charge of the restoration, said he believes the five-year goal will be met.

“If everyone rolls up their sleeves and the work is well planned, it is conceivable that returning the cathedral to a place of worship within five years will not be an impossible feat,” he said, according to The Guardian. 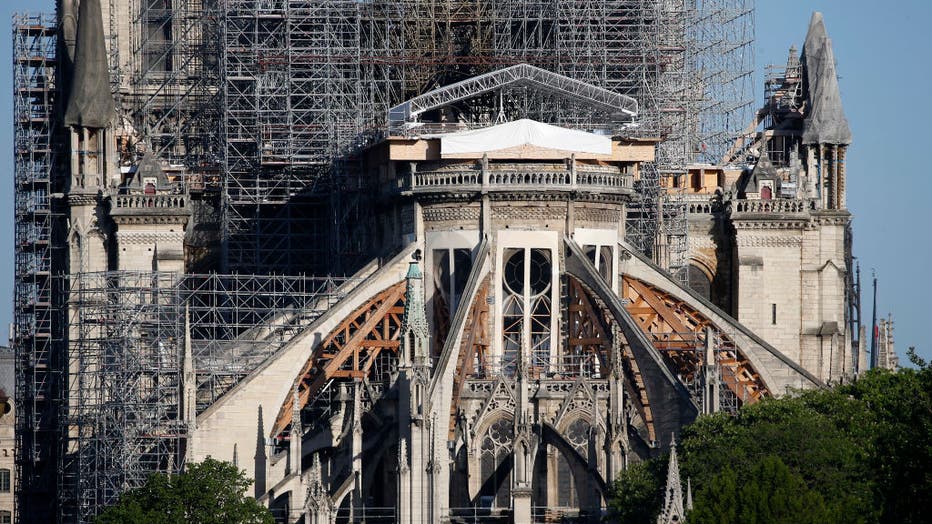 April 15 marks the first anniversary of the fire at Notre Dame destroying many parts of the Gothic cathedral. (Photo by Chesnot/Getty Images)

He told AFP his “squirrels,” workers who reach difficult areas by hanging from ropes, might be able to return.

"For these technicians, these tightrope walkers, social distancing is part of the job," he said.

"Lots of people said we'd cut corners to finish in five years. These are malicious comments -- It's a question of carrying out the work assiduously, without any hesitation," he added.

He said restoration may continue and the spire may not be finished by the deadline, but he thinks in five years it could once again be a place of worship.

The first Good Friday service since the fire was held inside the cathedral last week with a very small number of congregants, all practicing social distancing, AFP reported.

“Today we are in this half-collapsed cathedral to say that life is still here,” Michel Aupetit, the Archbishop of Paris, said during the historic veneration of the Crown of Thorns, according to National Geographic.

The cause of the fire is still unknown, but investigators believe it may have been caused by faulty wiring or a cigarette.