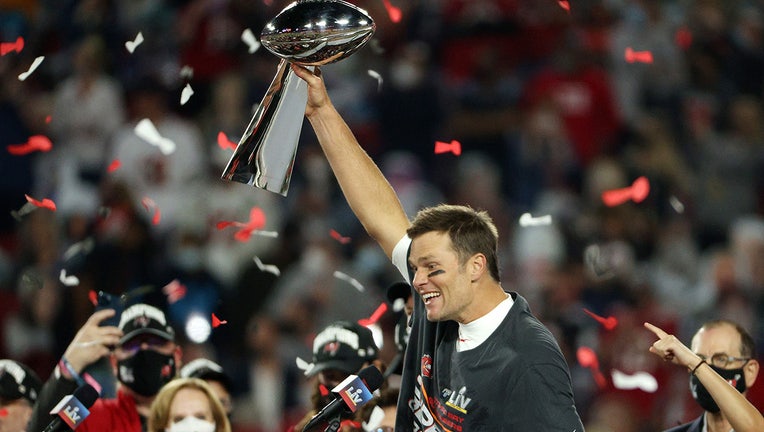 TAMPA, Fla. - The Tampa Bay Buccaneers’ run from the wild card to Super Bowl champions was a remarkable one.

Tampa Bay became the seventh wild-card team to win it all and the first since the 2010 Green Bay Packers. The Bucs were the first team to win four playoff games on the way to the title since AFC North champion Baltimore did it eight years ago.

The Bucs scored at least 30 points in all four wins, becoming the first team to do that in NFL history. There had been 10 previous champs to score at least 30 in every playoff game, with the 1966 Packers the first to do it in the two postseason games they played that season.

When the gorilla outside State Vacuum in Tampa wears The GOAT's number, it’s a big deal.&nbsp;

There had been nine other teams that did it in all three playoff games, including the Chiefs last season and Brady’s New England Patriots in the 2016 season.

The Bucs also reached 30 points in their final three regular-season games, giving them the eighth streak since the merger with at least seven straight 30-point games. The last team to do that was the Broncos, who had a 12-game streak in 2012-13.

NO TOUCHDOWNS: The Bucs did something no college or NFL team had done before by keeping Patrick Mahomes’ squad out of the end zone for an entire game.

The Chiefs had scored at least one TD in every game Mahomes played and Texas Tech did the same in his college career.

Kansas City was just the third team to fail to score a TD in a Super Bowl, with the Rams also doing it two years ago in a 13-3 loss to New England and the Dolphins in a 24-3 loss to Dallas in Super Bowl 6.

PLAYOFF LENNY: Leonard Fournette finished off an impressive playoff run by gaining 135 yards from scrimmage and scoring a TD for Tampa Bay.

Fournette had 448 yards from scrimmage and four touchdowns in the postseason, marking the 10th time a player has had at least 400 yards and four TDs. Emmitt Smith is the only player to do it twice, pulling the feat off in back-to-back years in the 1992-93 seasons.

The last player to do it before Fournette was Giants receiver Hakeem Nicks, who had 444 yards and four TDs in the 2011 season.

Fournette also joined Terrell Davis (1997 season) and Larry Fitzgerald (2008) as the only players to score in four playoff games in a single postseason.

The election of Woodson and Manning marks the first time that players who finished 1-2 in the Heisman Trophy voting in a given year ended up in the Pro Football Hall of Fame. Woodson beat out Manning in 1997, with fellow Hall of Famer Randy Moss coming in fourth. Ryan Leaf was third. Woodson is the 10th Heisman Trophy winner to get voted into the Hall.

Johnson is the fifth player to make the Hall who started his career after Brady did in 2000, joining Steve Hutchinson, LaDainian Tomlinson, Ed Reed and Troy Polamalu.