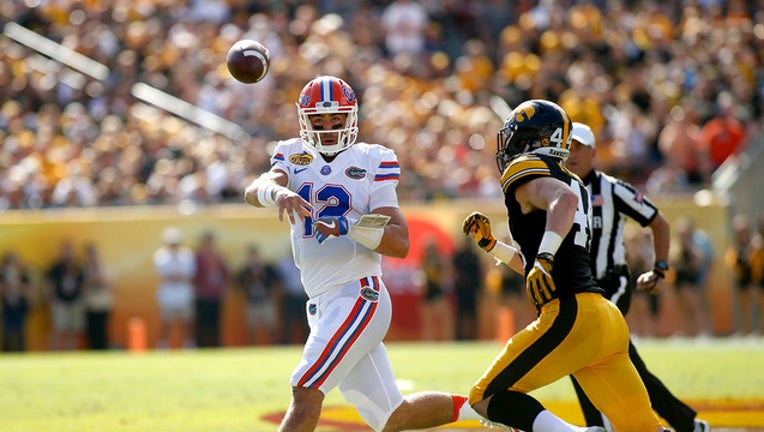 Quarterback Austin Appleby gets pressure from linebacker Ben Niemann as he throws a pass to an open receiver during the first quarter of the Outback Bowl. (Photo by Brian Blanco/Getty Images)

TAMPA (AP) - Austin Appleby threw for 222 yards and two touchdowns, helping No. 20 Florida end a two-game losing streak with a 30-3 rout of No. 21 Iowa in the Outback Bowl on Monday.

Mark Thompson scored on an 85-yard pass play in the first half and Appleby, a graduate transfer who spent the past four seasons at Purdue, tossed a 6-yard TD pass to DeAndre Goolsby to break the game open late in the third quarter. Chauncey Gardner, Jr., returned the first of his two fourth-quarter interceptions 58 yards for a 24-3 lead.

Florida (9-4) rebounded from lopsided losses to archrival Florida State and No. 1 Alabama, scoring more points on Iowa (8-5) than the Hawkeyes allowed to Michigan, Illinois and Nebraska combined while ending the regular season on a three-game winning streak.

Iowa's C.J. Beathard led an early field goal drive, and managed to get his team close to the end zone on two other occasions. Florida's defense stiffened both times, stopping the Hawkeyes on downs at the Gator 3 in the second quarter and forcing them to settle for a 30-yard field goal that sailed wide right midway through the third quarter.

Appleby, who actually began his career at Purdue against Iowa, shrugged off throwing interceptions on Florida's first two drives of the day to finish 14 of 25 passing.

Akrum Wadley ran for 115 yards, giving Iowa a pair of 1,000-yard rushers in the same season for the first time. The junior finished with 1,081, and LeShun Daniels wound up with 1,058 after gaining 45 Monday.

Florida: The Gators could be looking at having to replace at least three stalwarts on defense — tackle Caleb Brantley and cornerbacks Jalen Tabor and Quincy Wilson — who are expected to leave school early to enter the NFL draft. Linebacker Alex Anzalone and defensive back Duke Dawson also are considering turning pro.

Iowa: Like Florida's Tabor and Wilson, cornerback Desmond King is a likely high NFL draft pick. He won the Jim Thorpe Award as the nation's top defensive back as a junior and was just as good this year, though opponents' reluctance to throw his way — three interceptions this season vs. eight in 2015 — may have hurt his chances to win the award again as a senior. The Hawkeyes will also lose quarterback C.J. Beathard, who finished his career 21-7 as a starter.

Beathard directed the best drive of the game by either team, moving Iowa from its own 36 to inside the Florida 10 with help from runs of 27 yards by Akrum Wadley and 11 yards by LeShun Daniels, plus an 18-yard pass to tight end George Kittle on third-and-14 from the Gators 28. Three plays later, Beathard dropped back to throw before scrambling for a 6-yard gain near the goal line. The Hawkeyes thought he scored, but officials ruled him down at the 1. Daniels was dropped for a 2-yard loss on fourth down. Florida snapped the 3-3 tie less than six minutes later, when Thompson scored on the longest reception and TD in Outback Bowl history.

Florida: Opens next season Sept. 2 against Michigan in Arlington, Texas.