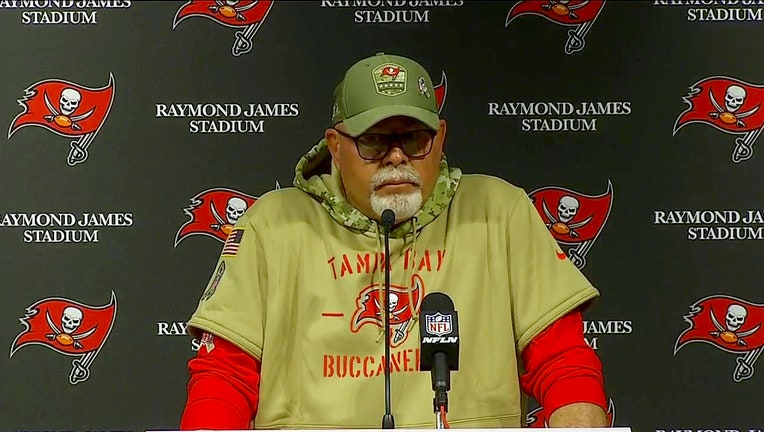 TAMPA, Fla. - The Tampa Bay Buccaneers are running out of time to save their season.

The struggling team has lost five of six games following a 2-2 start and likely will miss the playoffs for the 12th straight year. The only team currently with a longer active streak of futility is the Cleveland Browns, who haven't earned a postseason berth since 2002.

The Bucs (3-7) have finished last in the NFC South eight of the past 10 seasons. And, that's where they find themselves again after a 34-17 loss to the division-leading New Orleans Saints dropped them into the cellar, along with the Atlanta Falcons.

Coach Bruce Arians reiterated Monday that he and his players will not change the approach to the remainder of the season.

"Win them all," the coach said of the focus moving forward. "You can't win them all until you win one."

The biggest question that has to be answered over the next six games is whether Jameis Winston will return at quarterback in 2020.

The fifth-year pro who's earning nearly $21 million in the final season of the contract he signed as the No. 1 overall pick in the 2015 draft leads the NFL with 22 turnovers, including a league-high 18 interceptions. He threw four picks in last Sunday's loss to the Saints -- the third time he's had three or more in a game this year.

Arians, who has said he will give management an honest assessment of Winston's progress when it's time to make a decision on the quarterback's future, continues to support the 25-year-old.

"This team, we have a gift habit. We keep giving away points early in games and then try to fight our way back. ... It's been a habit, and it's one that we have to break, no matter whose fault it is," the coach said.

"It's frustrating as a coach because I see us practicing and preparing extremely hard. Guys are staying extra hours to prepare, but then it's not showing up on Sunday," Arians added. "And for me as a coach, it's my job to figure out why. That's kind of where we're at right now."

The passing attack is one of the most productive in the league, which is one reason for Arians' patience with Winston, who has thrown for 300-plus yards in a franchise-record five consecutive games.

The Bucs fell behind the Saints 20-0 in the first half, forcing the team to abandon the running game. Winston led the team in rushing for the second straight game, scrambling for 23 yards on two attempts. Running backs Ronald Jones and Dare Ogunbowale combined 13 yards on six carries. Eight rushing attempts overall were the fewest the Bucs have had in a single game.

Tight end Cameron Brate was targeted 14 times and had 10 receptions for 73 yards, primarily because New Orleans's game plan was geared to shut down leading receivers Mike Evans and Chris Godwin. His role could increase down the stretch, especially if O.J. Howard continues to underperform.

Howard was not targeted again after his first-quarter drop wound up in the hands of Saints linebacker Demario Davis. The 2017 first-round draft pick's slow start (17 receptions, 223 yards, one TD) has been a disappointment.

"I never believed in sports psychology before, but I'm starting to," Arians said. "There's something missing when you have talent and it doesn't show up on Sunday, or it's a focus issue.

Winston sprained his ankle against the Saints, however Arians doesn't believe it'll affect his status this week. The coach said there's a chance outside linebacker Carl Nassib, who missed the past two games, could return from a groin injury

They travel to Atlanta, which has won two straight to improve to 3-7. Sunday's loser will be left with sole possession of last place in the NFC South.