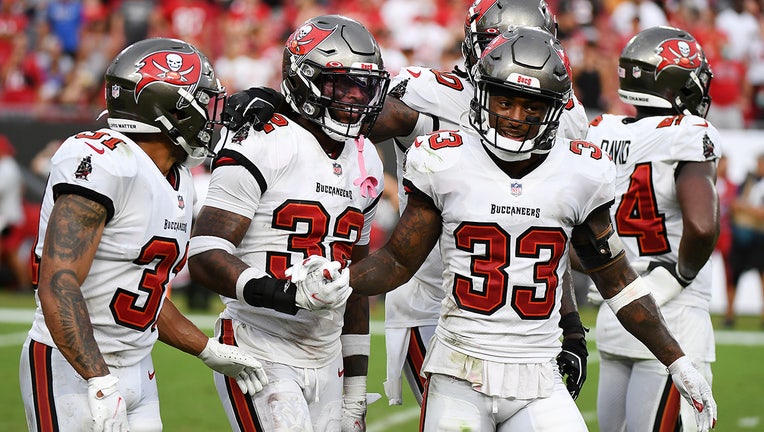 Mike Edwards is congratulated by teammates after returning his second interception for a touchdown against the Atlanta Falcons on September 19, 2021 in Tampa, Florida. (Photo by Eric Espada/Getty Images)

TAMPA, Fla. - For all that's been made about the importance of the Tampa Bay Buccaneers returning all 22 starters from last season, the team's depth is one of the keys to the 2-0 start for the defending Super Bowl champions.

Yes, Tom Brady has a personal-best nine touchdown passes and Rob Gronkowski is the first player in Bucs history with at least four TD receptions in two games. But contributions from a couple of versatile backups in an injury-depleted secondary have made a major impact, too.

Another reserve, safety Andrew Adams, was elevated from the practice squad the previous week and provided some much-needed flexibility in a secondary that began a season-opening victory over Dallas without injured starter Jordan Whitehead and lost cornerback Sean Murphy-Bunting to a dislocated elbow early in the game.

"Mike Edwards - hell of a football player. He plays a lot of positions and did a great job in that fourth quarter," coach Bruce Arians said of the third-year pro.

"I mean he is just a ballhawk. He always has been since he's been here," Arians added. "He finds the ball."

The Bucs prioritized retaining their starters from last year's title run in hopes of giving themselves the best possible chance of becoming the NFL's first repeat champions since Brady led the 2003 and 2004 New England Patriots to consecutive Super Bowl wins.

Sunday's victory was a franchise-record 10th straight, including playoffs. The team has scored 30 or more points in the past nine -- an NFL record for consecutive 30-plus outings in a win.

"What I think, and I'm sure other guys feel the same way, is we could do better. I really do," the 44-year-old, seven-time Super Bowl winner said.

Brady has nine TD passes through two games, two more than his previous best. He spread 35 completions among 10 different receivers against the Falcons, finishing with a pair of TD throws to Gronkowski, two more to Mike Evans and one to Godwin.

"It's great," Evans said of Brady sharing the ball among the team's many playmakers. "I mean we're putting up 30-plus points a game, so I'll take that all day every day."

Despite a 2-0 start, Arians said the Bucs have not played nearly as consistently as they'll need to moving forward.

Edwards was a third-round draft pick in 2019 and started seven of 15 games he played as a rookie. He lost his starting job after the Bucs selected Antoine Winfield Jr. in last year's draft, but has bought into his role as a backup.

"My rookie year I was still learning a bit, trying to learn (the) defense and being more comfortable," Edwards said. "Last year, I felt really comfortable accepting my role. ... This year, everybody just feels very comfortable playing with each other and knowing the whole defense, executing what we have to do out there."

Running back Ronald Jones II was benched after losing a fumble in Week 1 against the Cowboys. He averaged 4.5 yards per carry on six rushing attempts versus the Falcons, but also missed a blocking assignment on a blitz that resulted in Brady being sacked. Arians reiterated the fourth-year pro has to eliminate mistakes that are undermining his performance.

Wide receiver/kick returner Jaydon Mickens had an MRI performed on his hip. Arians was awaiting an update, but said he didn't think the team came out of Sunday's game with any serious injuries.

The Bucs intercepted Matt Ryan three times, giving them 57 takeaways since Todd Bowles was hired to run the defense in 2019. That's third in the NFL over that span behind Pittsburgh (66) and New England (63). Seattle (56) and Minnesota (55) are right behind Tampa Bay.

Arians noted it'll take a complete effort to go on the road and be successful against the Los Angeles Rams (2-0) this week.

"We haven't played for 60 minutes yet. And that's what we talked about," he said. "We are going to have to play 60 minutes to beat the Rams."