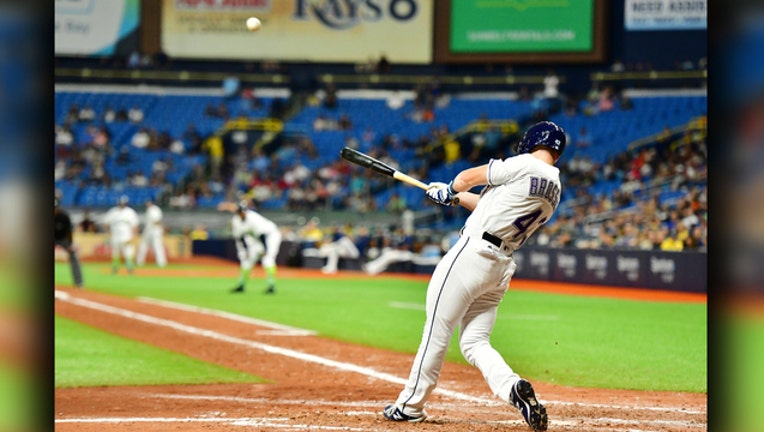 ST. PETERSBURG, Fla. (AP) - Mike Brosseau's pinch-hit RBI single in the 13th inning drove in Eric Sogard to give the Tampa Bay Rays a 1-0 win over the Detroit Tigers on Saturday night.

Rays pitchers struck out a franchise-record 24 batters, including 13 in 20 hitless at bats against relievers. Six Tigers hitters struck out at least three times.

Poche (3-4) got the win after striking out two of the three Tigers he faced in the 13th.

The win kept the Rays one-half game ahead of Oakland for the American League's second wild-card spot.

Detroit's final hit was Niko Goodrum's one-out double in the seventh off Rays starter Ryan Yarbrough. The next eight Tigers struck out against three different relievers.

Yarbrough, who came one out short of pitching the Rays' first complete game in three years on Sunday, is 6-0 with a 1.43 ERA over 56 2/3 innings in his last 11 appearances. He gave up three hits while striking out 10 in 6 1/3 innings.

Detroit starter Jordan Zimmermann allowed only one baserunner - on Pham's double - in five innings, throwing 63 pitches and striking out five.

In nine at bats in the first two games of the series, Miguel Cabrera has struck out seven times and grounded into a double play.

Since allowing a double to Boston's Andrew Benintendi, the first batter he faced as a Ray, Nick Anderson has retired 21 straight, 17 by strikeout. He struck out the side in the eighth inning Saturday. Anderson was acquired in a trade from Miami on July 31.

Tigers: C Grayson Greiner (lower back strain) moved from Class A Lakeland to Triple-A Toledo for the final step of his rehab process.

Rays: 2B Brandon Lowe, out since July 3 with a bruised right shin bone, will play with Class A Charlotte through Sunday at which time it will be determined if he will join Triple-A Durham. "It will be depended on if everybody feels he's moving well," manager Kevin Cash said. "If not we'll just keep him at Charlotte."

Tigers: LHP Matthew Boyd (6-9) will pitch Sunday's series finale. He has given up 11 earned runs over eight innings in his last two starts.

Rays: RHP Trevor Richards was added to the taxi squad from Triple-A Durham and is lined up to start or follow an opener Sunday. Acquired from Miami on July 31, Richards went 3-12 in 23 games, including 20 starts, for the Marlins.