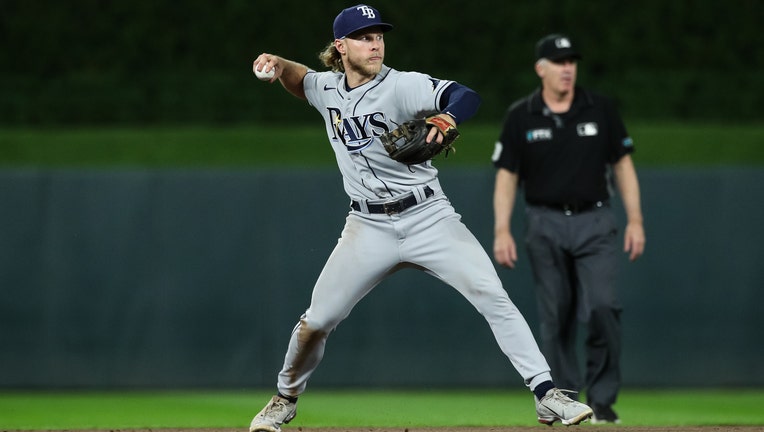 MINNEAPOLIS, MN - JUNE 10: Taylor Walls #6 of the Tampa Bay Rays throws the ball to first base to get Gio Urshela #15 of the Minnesota Twins out in the seventh inning of the game at Target Field on June 10, 2022 in Minneapolis, Minnesota. The Twins d

MINNEAPOLIS, Minn. - Byron Buxton has his mind and swing in powerful sync. The Minnesota Twins are following his lead — and scoring in bunches.

Buxton had his second straight

"You slow the game down and let it come back to you," Buxton said, "and eventually the hits that you hit hard start to fall, and things like this start to happen."

Buxton has gone deep five times in the last three days and moved into a tie for second in the major leagues with 17 homers in just 43 games. Carlos Correa tacked on a two-run shot in the eighth inning for the Twins, who have scored eight-plus runs in five of their last seven games.

Randy Arozarena and Vidal Bruján hit back-to-back homers for the Rays in the seventh. Isaac Paredes went deep in the second against Twins starter Devin Smeltzer (3-0), who allowed only one other hit over six-plus innings and retired 10 straight batters at one point.

Arozarena's home run was an

Drew Rasmussen (5-3) turned in his worst of 12 starts this year for Tampa Bay, coming off seven shutout innings of three-hit ball in his last turn. He was charged with seven runs on nine hits in 4 1/3 innings, though three runs were unearned thanks to a fifth-inning fielding error on first baseman Harold Ramírez.

Rays starters had allowed two runs or fewer in 20 of the last 26 games. The Twins just got done roughing up New York standouts Jameson Taillon, Nestor Cortes and Gerrit Cole earlier this week, though they won only one of those three games.

"Their lineup, one through nine, is really good. One through four or five is ridiculously good," Rays manager Kevin Cash said.

The Twins sent 11 batters to the plate in the fifth inning, a rally that included RBI doubles by Jorge Polanco and Gary Sánchez and RBI singles by Nick Gordon and Luis Arraez.

Buxton's first homer was a no-doubt drive into the second deck. The

"Shoot, from the mound it looked like he hit it one-handed," Rasmussen said.

This was Buxton's eighth multi-homer game, and he became the fourth player in franchise history to do so in consecutive games. Eddie Rosario (2019), Kirby Puckett (1987), Don Mincher (1963) and Harmon Killebrew (1959, with the Washington Senators) were the others.

"I’m sure he’ll do something next week or tomorrow that we haven’t seen him do before," Twins manager Rocco Baldelli said. "That’s some greatness right there."

The young, boisterous crowd in the left field bleachers spent much of the game taunting Arozarena, who was the closest Rays player to their seats, by chanting his first name and mixing in some "We want Randy!" verses. The good-natured razzing continued as Arozarena batted in the seventh, right before his inside-the-park homer.

Gordon, who played center field with Buxton taking a turn as the designated hitter, had a chance to catch it as he tried to camp under the high fly on the track, but the ball eluded his outstretched glove and bounced toward shallow center as Arozarena raced around the bases.

"I think the fans love me, and I think it’s fun to have fun with them," Arozarena said through a translator. "It helps me play a little bit better. It makes me happy."

The Twins staged a Buxton-themed giveaway for this game — not a jersey or a bobblehead, but a 2022-friendly non-fungible token. This was the first such promotion for the team involving the digital collectible, or NFT, and this one included images of Buxton's signature and a customized notation of the game information and seat location for each ticket-holder.

Twins: The rotation should get a big boost next week with the return of RHPs Sonny Gray (pectoral strain) and Joe Ryan (COVID-19), Baldelli said. Both pitchers are expected to start in Seattle, likely Tuesday and Wednesday.

Rays: RHP Shane Baz will start the middle game of the series in his 2022 debut. He's been on the 60-day injured list recovering from arthroscopic elbow surgery on March 21.

Twins: RHP Chi Chi González will come up from Triple-A St. Paul and start on Saturday. He pitched three innings in a fill-in start on June 3.