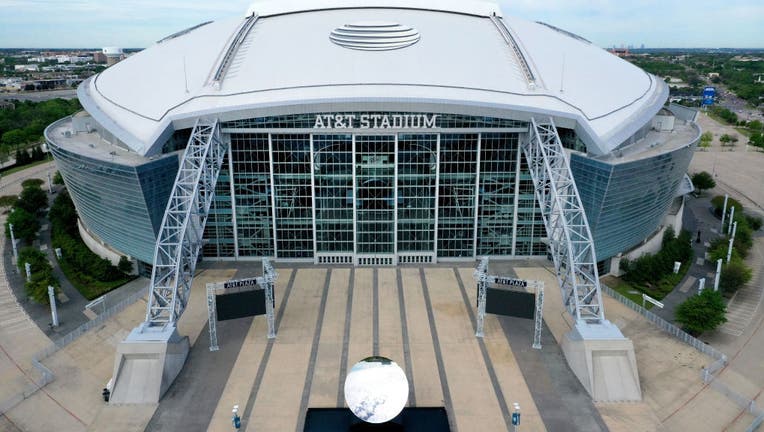 ARLINGTON, TEXAS - APRIL 01: An aerial drone view of AT&T Stadium, where the Dallas Cowboys NFL football team plays, on April 01, 2020 in Arlington, Texas. The NBA, NHL, NCAA and MLB have all announced cancellations or postponements of events bec

ARLINGTON, Texas - The College Football Playoff semifinal scheduled to be played at the Rose Bowl in Pasadena on Jan. 1 is relocating to the Dallas Cowboys' stadium in Arlington, a move prompted by California's ban on spectators at sporting events during the pandemic.

Top-ranked Alabama will face No. 4 Notre Dame in the College Football Playoff semifinal originally scheduled to serve as the 107th Rose Bowl.

There will be 16,000 fans socially distanced inside AT&T Stadium for the game.

Tarrant County Judge Glen Whitley says it’s all about balance, and does not think the added game will pose any major health risks.

"This will bring a tremendous economic boost to the area. We still have to be very cautious," he said.

Bowl officials said the relocation is due to the "growing number of COVID-19 cases" and "inability" to have family and fans in attendance.

Though, Tarrant County is seeing its own share of growing COVID-19 concerns.

Sunday, the county reported 1,079 patients in county hospitals who are sick with virus.

"The hospitals have continued to say, ‘We are okay.’ I know the numbers are moving upwards and that’s got us all watching it very closely. The hospital CEOs still say the hospitals are open, will stay open, and they can handle the issue," Whitley said.

Whitley said they have a proven record of safe events during the pandemic. Most notably hosting the 2020 World Series.

The Rose Bowl will be played two days after the annual Goodyear Cotton Bowl.

The Alabama Crimson Tide are the No. 1 seed in the playoff.

Officials explained why they gave them the game in Arlington over the playoff game in New Orleans.

With the pandemic changing the way games were played and watched this season, Alabama head coach Nick Saban said he is happy to hear more people will be allowed inside the stadium.

The Rose Bowl, know as the Granddaddy of all college football's postseason games, has been played every year since 1916.

Coaches and school officials with playoff contenders have complained about the Rose Bowl being unable to accommodate players’ family members because of California’s COVID-19 restrictions, put in a place as the state tries to fight a public health crisis that is straining its hospitals.

Notre Dame coach Brian Kelly even suggested that if the Fighting Irish were selected to play in the Rose Bowl, the school would boycott if players could not have family attend.

None of the teams in contention to be selected for the playoff are from the western United States.

The Rose Bowl asked the state for an exception to the restriction, but was denied twice, including earlier this week. The restrictions have been in place since March and UCLA has played its home football games at the Rose Bowl since November, including its regular-season finale Saturday night.

The other College Football Playoff semifinal on Jan. 1 will be held in New Orleans at the Sugar Bowl, with current plans to allow 3,000 fans at the Superdome. The championship game is scheduled for Jan. 11 at Hard Rock Stadium in Miami Gardens, Florida.

Hancock said it had not yet been determined if the semifinal at AT&T Stadium in Arlington would still be called the Rose Bowl. The name is part of licensing agreement and is co-owned by the Pasadena Tournament of Roses and the City of Pasadena.

If not, it would be the first time in more than 100 years no Rose Bowl game was played after a college football season. The first Rose Bowl was played Jan. 1, 1902.

The last time the Rose Bowl game was played outside Pasadena, California, was 1942. The game between Oregon State and Duke was played in Durham, North Carolina, because the West Coast was deemed unsafe after the attacks on Pearl Harbor on Dec. 7, 1941.