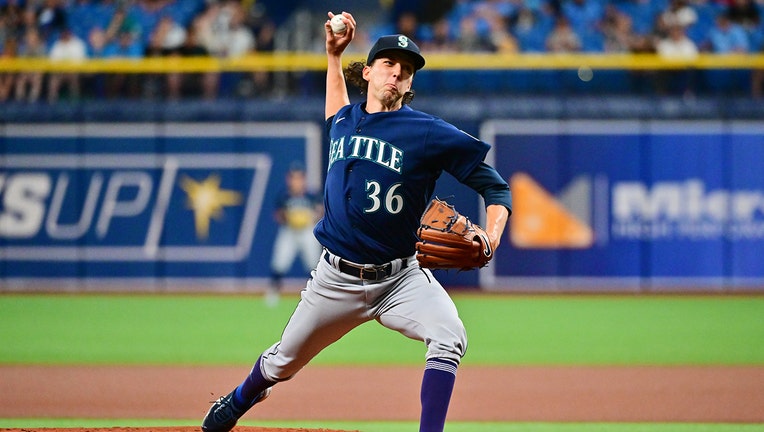 ST PETERSBURG, FLORIDA - APRIL 26: Logan Gilbert #36 of the Seattle Mariners delivers a pitch to the Tampa Bay Rays in the first inning at Tropicana Field on April 26, 2022 in St Petersburg, Florida. (Photo by Julio Aguilar/Getty Images)

Frazier's double off Josh Fleming (2-2) came during a seven-run fourth inning for the Mariners that was made possible by back-to-back errors from shortstop Wander Franco and first baseman Ji-Man Choi.

The game was scoreless when Franco's errant throw on a potential inning-ending double play ball left the bases loaded with one out. Tom Murphy then hit a bouncer to Choi, whose low throw got past catcher Mike Zunino, allowing two runs to score. Doubles by Julio Rodriguez and Frazier and Ty France's two-out single drove in the rest of the runs in the frame.

Gilbert (3-0) gave up two hits and three walks while striking out seven and left the game with the Mariners up 8-0. The 24-year-old right-hander has given up one earned run in four starts.

René Pinto and Franco hit two-run homers for the Rays off reliever Matt Koch in the seventh. Pinto's homer was the first hit of his career while Franco went deep for the fourth time this season.

Mariners: Manager Scott Servais, who had been away from the team for six days after testing positive for COVID-19, rejoined the team just before the game. ... C Luis Torrens was reinstated from the COVID-related injured list without having missed a game.

Rays: C Mike Zunino left the game in the fourth inning with a left biceps strain. ... C Francisco Mejia, the only Rays player to test positive so far, missed a fourth game on the COVID-related injured list.