"Today's the start,” said USF's new head football coach, Jeff Scott. "There's going to be a lot of new beginnings. How we start and then really how we attack each day between the start and finish is going to ultimately decide what are finish is and where it is."

It was literally a high-flying start for the first practice. Defensive back Vincent Davis and wide-receiver Xavier Weaver kicked off the work with high-flying synchronized backflips.

"I didn't have that scheduled, but I guess that's something they've done here in the past,” Scott said with a smile. "That was actually my first time seeing that and I was not expecting that. They landed it today, so we'll let it happen Thursday and go from there."

Coach Scott doesn’t look at his first head-coaching job as just a new coaching change; rather it's a complete culture change for the entire South Florida football program. This was the very first day that the entire group was on the field together.

Coach Scott admitted he did take a moment to soak in this new opportunity.

"I got out there a little earlier than I probably typically would get out to practice just ‘cause I wanted to survey it a little bit,” laughed Scott. "Spend a minute kind of thinking through it, but really outside of that, that was it." 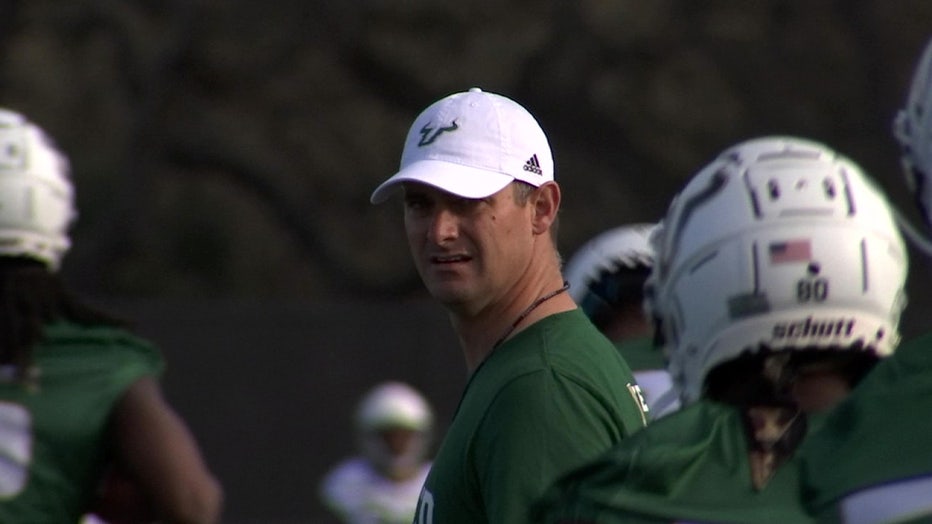 For the players, there was a noticeable difference -- a fast-paced, focused and a family feeling. Jeff's dad Brad Scott, who coached for 30 years, gave up his assistant AD job at Clemson; Jeff's wife and daughter Savanna were just a few feet from the field.

It’s the atmosphere that Coach Scott wants his players to embrace.

"I seen a lot of wives out here with their kids,” said Bulls defensive back K.J. Sails. "I kind of like it.  I was like my son, my family can come out here at any practice, so I definitely feel the family part of it."

"I want our players to not just see me or the other coaches as their coach,” added Scott. "I want them to see us as a husband, as a father. Hopefully help them in their development in a lot of different areas.”