"My job is going to kind of be making sure we don't use all our emotion and energy during the week," Scott told reporters Tuesday. "t's about peaking Saturday night at 7 o'clock."

Getting too excited won't be hard as the Bulls are growing tired of facing each other in practice.

"You kind of get tired of seeing them sometimes because you know what we're going to do. We know what you're going to do," USF defensive back KJ Sails said. "We're just ready to see somebody else."

That somebody else, The Citadel, will only play four games this season. Coach Scott expects this to make them have a chip on their shoulder.

"They've got us this week, and then turn around and play Clemson next week so they're trying to wreck some dreams," Coach Scott said. "When you can play free and loose like I know they will, it makes us need to be focused, and be ready."

Another reason players are excited is because there was a chance just months ago that a season wouldn't happen.

"I'm really thankful for it because just a few months ago they were talking about not having this year at all," wide receiver DeVontres Dukes said. 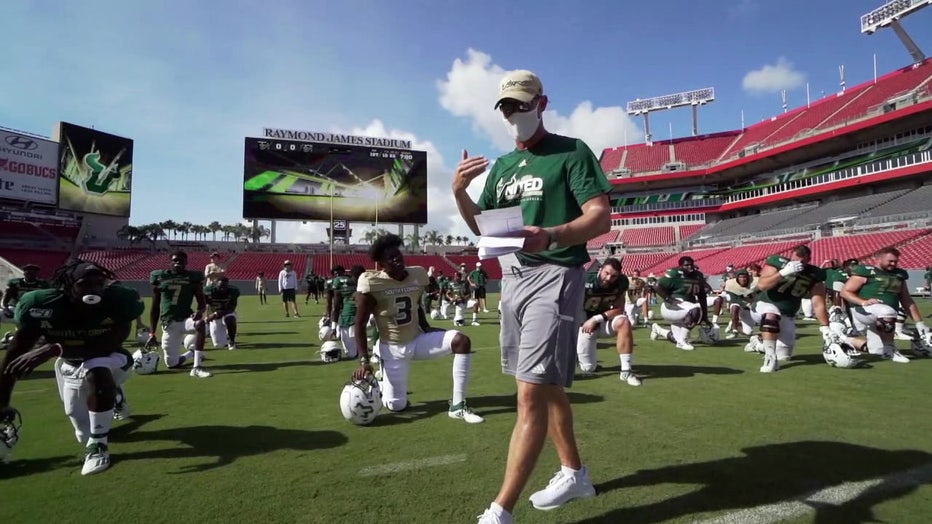 Since taking the head football coaching job at USF, Scott has had to work around uncertainty about the season, various COVID protocols, and got involved in Sails' unity walk back in early June. He hasn't had the chance to sit and reflect on making his head coaching debut. That's just the way he likes it.

"You've got to be so busy being great at what's in front of you that you don't think about that," Scott said, before admitting he may take a quick moment to look around on game day. "I just know how I am. I'll take a minute or two and kind of enjoy that moment in that time."

It will only last a moment or two. Scott then must focus on coaching a game, because the real moment he's chasing is one he and the Bulls will have to earn.

"For me, I want to be able to enjoy the moment in the locker room with the players," Scott added. "All this work they've put in to have a special ending to the first game would be ideal."