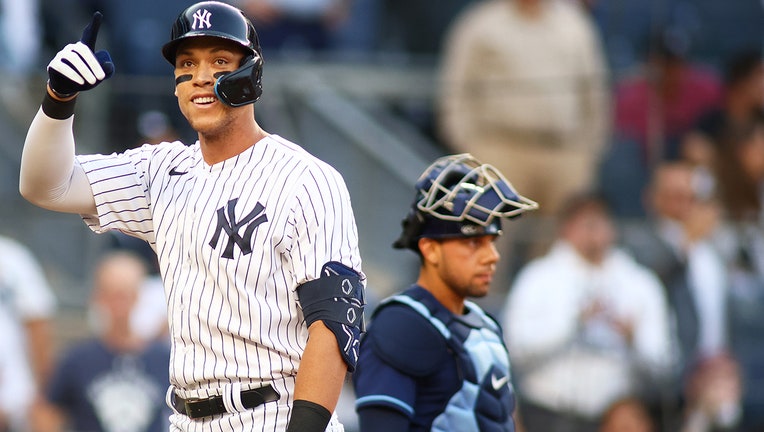 The major league-leading Yankees have won six in a row and 13 of 14 overall. New York’s 46-16 record is its best after 62 games since 1998. The team's 13-game winning streak at home is its longest since 1973 at the original Yankee Stadium.

The game was interrupted by nearly 17 minutes in the top of the eighth inning in a dispute over a pitching change after Randy Arozarena was hit by Miguel Castro’s pitch with the Yankees leading 4-1. Pitching coach Matt Blake went to the mound while a Rays trainer attended to Arozarena. Ji-Man Choi pinch hit and manager Aaron Boone came out to bring in left-hander Lucas Luetge.

Holmes remained perfect in 11 save chances after Taylor Walls reached leading off the ninth on an infield hit that first baseman Anthony Rizzo didn't handle cleanly. Vidal Bruján bounced into a forceout, Yandy Díaz took a sinker for a called third strike that ended an eight-pitch at-bat and pinch-hitter Francisco Mejía grounded out.

New York, with a comfortable lead over second-place Toronto in the AL East, moved 11 games ahead of the third-place Rays, who have lost four of five. Tampa Bay outhit the Yankees 7-3, the second straight night the Rays lost despite having more hits.

Cortes started 18 of 22 batters with strikes and lowered his ERA to 1.94, allowing one run and three hits in 5 1/3 innings. He left shortly after Higashioka’s throw back to the mound clipped off his glove and his head. Cortes stayed in to face Manuel Margot, who doubled in a run, then walked Arozarena on four pitches before Wandy Peralta came in and escaped two-on trouble.

McClanahan, who had won six straight decisions, gave up four runs and three hits in six innings, but just one run was earned and his 1.84 ERA remained second in the AL to Houston’s Justin Verlander. Tampa Bay has allowed 43 unearned runs, second-most to 44 by the Chicago White Sox.

Judge put the Yankees ahead in the first with his sixth homer in eight games, an opposite-field drive into the right field short porch off a curveball. The ball would not have been a home run in any of the 29 other big league ballparks.

Josh Donaldson led off the fifth with a fly to center that Phillips — who had replaced Kevin Kiermaier — dropped for a two-base error. Phillips appeared to lose concentration while making sure he didn’t collide with Margot in right-center.

With two outs and a runner on third, McClanahan fell behind Isiah Kiner-Falefa 3-0, then walked him intentionally. Higashioka pulled a 1-0 fastball just inside the left field foul pole for his third home run in six plate appearances — after hitting none in his first 100. Donaldson, standing off third, tried to wave the ball fair and raised both arms in the manner of Carlton Fisk in the 1975 World Series.

Higashioka’s homer was the Yankees’ major league-high 100th. They have allowed 48, tied with San Francisco for the big league low.

Boone said he will use Holmes in high-leverage situations when Aroldis Chapman returns from the injured list, not specifying who will close.

Aaron Hicks was booed during his fifth three-strikeout game, which dropped his batting average to .222.

INF Ender Inciarte was released from a minor league contract by the Yankees. He hit .252 with four homers and 11 RBIs in 34 games at Triple-A Scranton/Wilkes-Barre.

Rays: Kiermaier left in the middle of the third inning because of left Achilles inflammation. ... RHP Drew Rasmussen was placed on the 15-day IL, retroactive to Sunday, with a strained left hamstring. RHP Ralph Garza Jr. was recalled from the taxi squad. C Mike Zunino, on the IL since Friday with left shoulder inflammation, was sent for a second MRI, this time on his neck.

Yankees: RHP Domingo Germán, sidelined since spring training with right shoulder impingement, was to pitch three innings of batting practice on Wednesday at the minor league complex in Tampa, Florida.