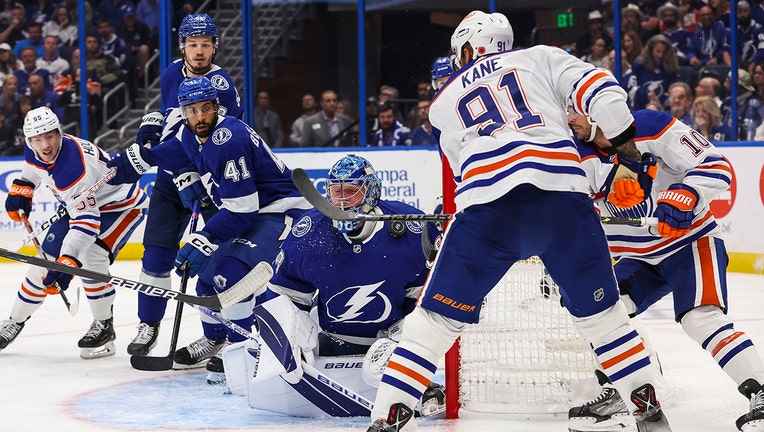 Goalie Andrei Vasilevskiy #88 of the Tampa Bay Lightning looks for the puck against Evander Kane #91 of the Edmonton Oilers during the second period at Amalie Arena on November 8, 2022 in Tampa, Florida. (Photo by Mark LoMoglio/NHLI via Getty Images)

TAMPA, Fla. - Edmonton forward Evander Kane left early in the second period of the Oilers' 3-2 win over the Tampa Bay Lightning after being cut on the left wrist by a skate blade Tuesday night.

The Oilers said Kane was transported to a hospital, was in stable condition and was scheduled to undergo a procedure Tuesday night.

Kane got tangled with Lightning defenseman Philippe Myers just inside the Edmonton defensive zone and while on the ice was cut by Tampa Bay forward Pat Maroon's skate blade 3:27 into the period.

Kane grabbed the lacerated area with his right hand and quickly skated to the bench before heading for the locker room.

Connor McDavid had a goal and an assist for the Oilers, who had lost three straight. Jack Campbell made 35 saves, and Warren Foegele and Leon Draisaitl added goals.

Campbell made a number of strong saves during the final minute.

McDavid extended his point streak to eight games (nine goals, 19 points). He has 14 goals in 14 games this season.

Draisaitl has a five-game goal streak, and a point in nine consecutive games (seven goals, 18 points).

Lightning star Nikita Kucherov extended his point streak to 11 games (14 assists, 20 points) with an assist, but had his six-game goal streak snapped. He left briefly late in the second after being slashed on the wrist.

McDavid and Draisaitl had power-play goals during the opening 4:07 of the second to put the Oilers up 3-1.

Killorn made it 3-2 just 49 seconds into the third.

Oilers defenseman Ryan Murray preserved the one-goal advantage when he swiped away Maroon's in-close shot off the goal line with eight minutes to play.

After giving up the first eight shots, the Oilers opened the scoring when Foegele had a short-handed goal 7:15 into the game on Edmonton’s initial shot.

Hagel tied it 2:08 after Foegele’s goal. Tampa Bay outshot Edmonton 16-7 in the first period — the Oilers arrived at their Tampa hotel around 3 a.m. after losing 5-4 at Washington on Monday night.

The Oilers killed off all five short-handed situations after allowing four power-play goals to the Capitals. Edmonton went 2 for 4 on the power play.

It was the first NHL game to feature the last six Art Ross Trophy winners since Game 5 of the 2001 Eastern Conference finals, when New Jersey defeated Jaromir Jagr, Mario Lemieux and the Pittsburgh Penguins.

Kucherov, McDavid and Draisaitl have combined to lead the NHL in points for each of the last six seasons.

"You’ve got some star power on the ice," Lightning coach Jon Cooper said.

Kucherov has 12 assists and 22 points in 13 games against Edmonton. … McDavid has nine goals and 14 points in nine games against Tampa Bay. … Foegele stopped an 18-game goal drought.