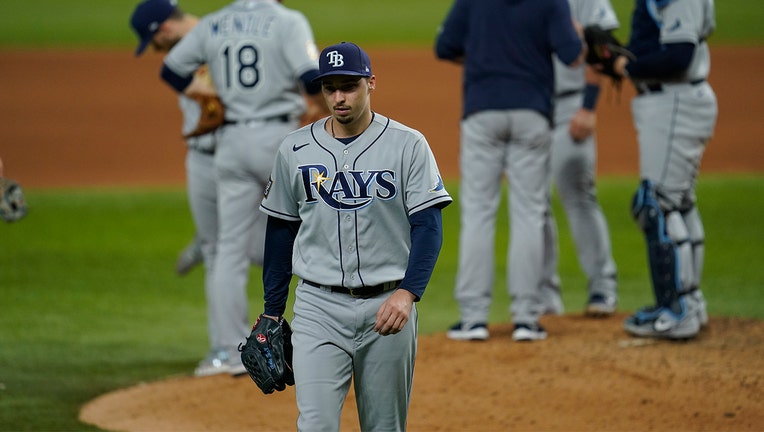 Rays manager Kevin Cash stepped out of the dugout, and Blake Snell turned his head to curse.

So too, no doubt, did fans watching on TV back in Tampa, Florida.

Cash pulled Snell after 73 pitches and 5 1/3 sterling innings Tuesday night, turning Game 6 of the World Series over to his vaunted bullpen — a move that backfired immediately as the Los Angeles Dodgers rallied for a 3-1 victory to wrap up their first championship in 32 years.

“I guess I regret it because it didn’t work out,” Cash said, later adding, “personally, I thought Blake had done his job and then some.”

Cash was immediately criticized — by fans, broadcasters and players around the majors.

“So who gets to pull the manager?” Mets pitcher Noah Syndergaard tweeted.

The decision, driven by advanced analytics, could come to define Cash, just as past pitching moves have followed other managers when they didn’t work out. A look back at other October mishaps:

Who knows? Bobby Thomson’s famed “Shot Heard ’Round the World” might never have happened without a bounced curveball in the bullpen.

The New York Giants, having trailed the bitter-rival Dodgers by 13 1/2 games in mid-August, closed fast and forced a best-of-three National League playoff. They split the first two games, and Brooklyn starter Don Newcombe took a 4-1 lead into the bottom of the ninth in Game 3 at the Polo Grounds.

After Whitey Lockman’s RBI double with one out made it 4-2 and put runners at second and third with Thomson coming up, Brooklyn manager Charlie Dressen pulled Newcombe.

Dressen picked Ralph Branca, who’d given up a homer to Thomson in Game 1 and faded down the stretch. Carl Erskine was warming up, too — he’d won 16 games in the regular season. But a coach saw Erskine bounce a curve in the ’pen and the Dodgers left him there.

More than 50 years later, a whisper became a reality when it was revealed the Giants had used a spyglass-and-buzzer system to steal opposing catchers’ signs at the Polo Grounds and relay pitches to their hitters. Thomson always claimed he didn’t get any sign; Branca was never convinced.

With the season on the line, Red Sox manager Grady Little gambled on Pedro Martinez against the rival Yankees and lost the game and his job.

Martinez, a three-time Cy Young Award winner, entered the eighth with 100 pitches and a 5-2 lead at Yankee Stadium. Derek Jeter hit a one-out double and Bernie Williams scored him with a single to bring left-handed hitter Hideki Matsui to the plate.

With lefty specialist Alan Embree warm in the bullpen, Little visited the mound but opted to leave Martinez in. Matsui lined a ground-rule double and then scored the tying run on Jorge Posada’s bloop double — Martinez’s 123rd and final pitch.

Aaron Boone hit a game-ending leadoff homer in the 11th, sending New York to the World Series. Little was fired after the season and replaced by Terry Francona, who led Boston as it ended the Curse of the Bambino by winning the 2004 World Series.

Matt Harvey and the New York Mets held a 2-0 lead, needing a win to send the Series back to Kansas City. A fired-up Harvey was at 102 pitches following a 1-2-3 eighth inning and told manager Terry Collins in the dugout — in no uncertain terms — he was going back out for the ninth.

“I wanted it bad,” Harvey said. “The way the game was going, the last thing I wanted to do was not finish what I started.”

Collins relented, and a huge roar went up at Citi Field as Harvey sprinted to the mound in pursuit of his second major league complete game. But he walked Lorenzo Cain on a full-count slider, and Eric Hosmer hit an RBI double.

Harvey was finally pulled for closer Jeurys Familia, and the Royals tied the game with the help of a bad throw by first baseman Lucas Duda. They won 7-2 in 12 innings for their first championship in 30 years.

“Obviously, I let my heart get in the way of my gut,” Collins said. “It didn’t work. It was my fault.”

The Orioles and Blue Jays were tied at 2 after five innings. As the game stretched on and went into extra innings, Baltimore manager Buck Showalter kept All-Star closer Zack Britton in the bullpen, hoping his club would take a lead that Britton could then close out.

The offense never came through, and Toronto finally won on Edwin Encarnación’s three-run homer in the bottom of the 11th off Ubaldo Jiménez — a pitcher with a 5.44 ERA. Baltimore’s season ended, and baseball’s best reliever never got in the game after compiling a 0.54 ERA and converting all 47 save chances that year.

The Chicago Cubs led the Cleveland Indians 5-1 heading into the bottom of the fifth. Kyle Hendricks, who won 16 games for the Cubs that year with a major league-low 2.13 ERA, walked Carlos Santana with two outs, and manager Joe Maddon pulled the right-hander after just 63 pitches.

The rest of the night was a scramble for Maddon and the Cubs. Jon Lester replaced Hendricks and threw a wild pitch that brought home two runs. Aroldis Chapman allowed Rajai Davis’ tying homer with two outs in the eighth before the Cubs ended up winning 8-7 in 10 innings for their first championship since 1908.

Too bad for Houston fans, the last time they saw Gerrit Cole throw, it was in the bullpen rather than on the mound.

Zack Greinke had permitted just two runners and took a 2-0 lead into the seventh inning against Washington at Minute Maid Park. But after Anthony Rendon hit a solo home run with one out and Juan Soto followed with a walk, manager AJ Hinch decided to make a change.

Cole was all warmed up in the bullpen — he’d never pitched in relief. But he had gone 20-5 during the regular season, led the majors in strikeouts and topped the AL in ERA. And he was 4-1 in the postseason, including a dominant win in Game 5.

Plus, he wanted to pitch. Instead, Hinch brought in reliever Will Harris, who promptly gave up a two-run homer to Howie Kendrick. The Nationals went on to win 6-2 for their first championship.

Hinch said after the game that he planned to have Cole close in the ninth.

“I wasn’t going to pitch him unless we were going to win the World Series and have a lead,” Hinch said.

Cole became a free agent and signed a $324 million, nine-year deal with the Yankees.