TORONTO, Canada - It wasn't a champagne celebration inside the Tampa Bay Lightning's locker room Tuesday; just a little water shower sprayed by teammates on players who wobbled on weary legs into a winning locker room.

After 6-plus hours of playoff hockey and 20 periods dating back to 2019, the Lightning finally enjoyed a win over the Columbus Blue Jackets.

"It's going to take a little time to digest," said Jon Cooper. "I'll remember looking at my salmon salad wanting to eat it the whole time during the game, but I thought that was going to, I don't know break up the karma, so I stayed hungry."

The whole Lightning team was starving for a win over a team that swept them in the first round of the playoffs last season. They satisfied that hunger with a franchise-record, marathon game that left Lightning players exhausted.

"I don't know how many guys have been in a game that long, but that was something for sure," said Brayden Point, who scored the game-winner."

"If you send a French, fresh, oh my God, my words are terrible today," laughed Yanni Gourde, who stumbled through his press conference. "My bad. I'm tired right now, if you guys can't notice." 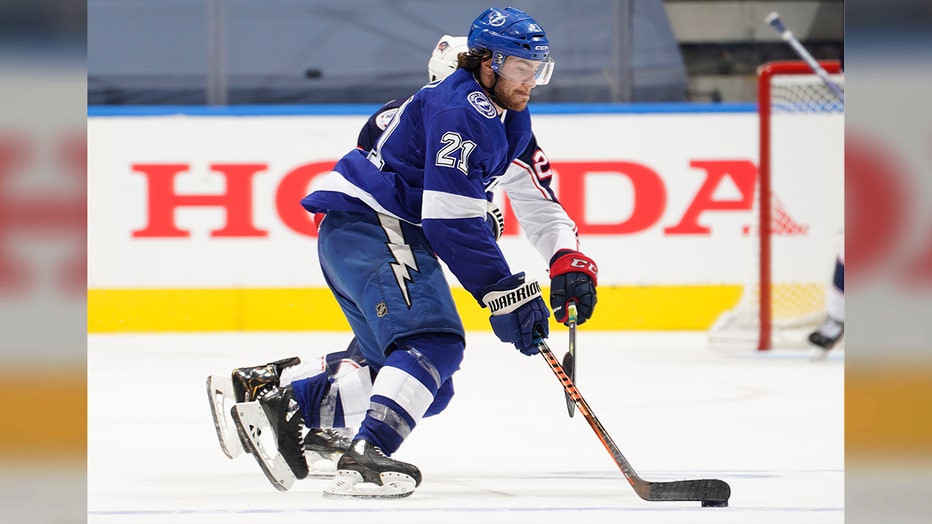 Brayden Point #21 controls the puck against the Columbus Blue Jackets during the fifth overtime of Game One of the Eastern Conference First Round of the 2020 NHL Stanley Cup Playoff at Scotiabank Arena on August 11, 2020 in Toronto, Ontario. (Mark Blinch/NHL / Getty Images)

The Lightning had the day off to rest and recover. None of them had ever been through a game like this and they're feeling it.

"When I woke up I was pretty sore," said Tyler Johnson. "It kind of makes you realize what you went through yesterday. Today, kind of just relaxing a little bit. Maybe do the recovery boots. Go for a walk. Maybe a light spin. You have to kind of stay active. Get all that lactic acid out of your system."

What the Lightning will never get out of their minds is the memories of this thriller.

"I'll always remember in the intermissions, guys laughing, joking and having fun," said Johnson. "I don't know if it was because we were just exhausted, because it was the only thing we would do, or what it was. It was a different game that I'm proud to be apart of it, but at the same time I don't know if I ever want to do it again."

The Lightning want to repeat the results, but in regulation, on Thursday.