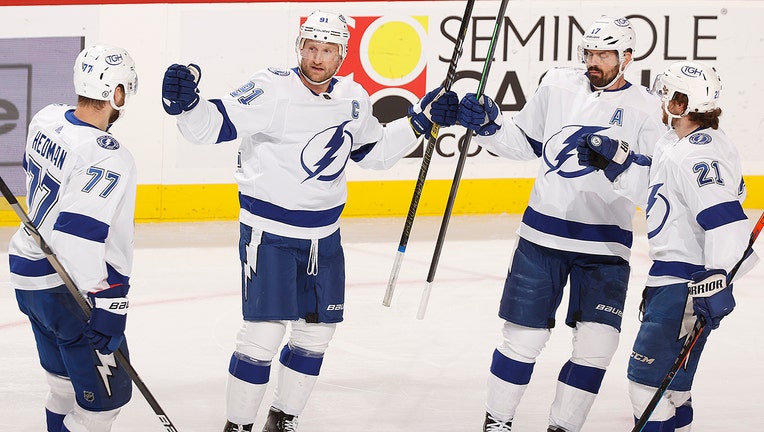 SUNRISE, FL - APRIL 24: Teammates congratulate Steven Stamkos #91 of the Tampa Bay Lightning after he scored a first period goal against the Florida Panthers at the FLA Live Arena on April 24, 2022 in Sunrise, Florida. (Photo by Joel Auerbach/Getty I

SUNRISE, Fla. - Jon Cooper walked into his postgame interview clutching a pair of hand warmers, something the Tampa Bay Lightning coach never recalled using during any game other than one played outdoors.

His hands were freezing. His team was sizzling.

Nikita Kucherov and Steven Stamkos each had two goals and two assists, Andrei Vasilevskiy stopped 37 shots and the Tampa Bay Lightning snapped Florida’s franchise-record 13-game winning streak with a 8-4 win over the Panthers on Sunday night.

"We knew the streak they were on," said Tampa Bay's Nick Paul, who scored twice. "And we wanted to come here and be the ones that ended it."

The Lightning won their third straight, and have scored 22 goals in that stretch.

Victor Hedman had four assists for Tampa Bay, which got two power-play goals and a short-handed tally. Brayden Point and Cal Foote also scored for the Lightning, who remained alive in the race with Toronto for the No. 2 spot behind Florida in the Atlantic Division.

There were fights, bloodied faces, bloodied jerseys, and even Florida interim coach Andrew Brunette saw his night end early. Cooper shrugged it off as just the latest chapter of Panthers-Lightning.

"The playoffs are like on steroids to what we saw tonight," Cooper said. "You've got to be ready and games like this help you."

Sam Reinhart scored his 30th and 31st goals for Florida, which also got goals from Brandon Montour and Mason Marchment. Spencer Knight left in the second period after allowing five goals on 17 shots, and Sergei Bobrovsky played the final 27 minutes in net for the Panthers.

"I thought 5-on-5 we were fine," Brunette said. "We just got a little disappointed at the end of our power plays, giving up goals. ... They're a great power play team."

And even though Tampa Bay’s next game is home on Tuesday, the Lightning weren’t heading home after the game. They’re off to Washington, invited by President Joe Biden to visit the White House on Monday in celebration of their 2020 and 2021 Stanley Cup victories.

"It’s probably the most popular house in the country," Cooper said. "To understand the history and the great people that have occupied that house over the last couple hundred years, it’s history. And for us to have an opportunity to get inside and be a part of that, it’s pretty cool. Took us a couple championships to finally get in there."

Florida lost on home ice for the first time since Feb. 26, but remained four points ahead of Colorado in the race for the President’s Trophy — awarded for the best NHL regular-season record. The Panthers have 120 points; Colorado remained on 116 after losing Sunday to Winnipeg. Both the Panthers and Avalanche, who had general manager Joe Sakic watching in Florida on Sunday night, have three games left.

"There's some things we've got to shore up, absolutely," Brunette said.

He said he got his misconduct for simply asking one of the game officials a question.

"I guess they didn't like that question," Brunette said.

Jonathan Huberdeau had an assist for Florida, his 115th point of the season. He's now three points behind Edmonton's Connor McDavid for the league lead; McDavid had two assists earlier Sunday in the Oilers' loss to Columbus.

The Panthers finished 34-7-0 at home, by far the best record in franchise history and an excellent sign for a team that has clinched the right to play Game 1’s — and, if necessary, Game 7’s — throughout at least the first three rounds of the Stanley Cup playoffs.

And the Panthers ended up as just the second team in NHL history to record two different home winning streaks of at least 11 games in the same season. The Detroit Red Wings did it in 1995-96, both of those being 12-game streaks.

But the Lightning are still the champions, looked the part on Sunday and get to celebrate in Washington on Monday.

"That’s something everyone dreams of as a kid," Lightning forward Brandon Hagel said. "As you get older, you understand a little bit of the privilege winning teams and players get."

Reinhart became the fourth Florida player with 30 goals, and that meant the Panthers joined Calgary as the only team with four such players so far this season. He also became the 46th player in the NHL with at least 30 goals this season, the most since 47 players got to that milestone in 2005-06.

NOTES: Florida’s finished with 34 home wins this season, the third-most in NHL history. Detroit (1995-96) and Philadelphia (1975-76) both won 36 home games in those seasons. ... The 68 points on home ice this season for Florida smashed the previous team mark of 58, set in 1999-2000. ... Tampa Bay and Florida split four games this season, one of the Lightning wins coming in overtime. ... Florida was hit with 66 penalty minutes. ... The Lightning improved to 19-0-1 when Kucherov has at least two points in a game this season.