TAMPA, Fla. - Steven Stamkos, Pat Maroon and Ondrej Palat each had a goal and an assist, and the Tampa Bay Lighting scored four times in the second period and beat the Colorado Avalanche 6-2 Monday night in Game 3 of the Stanley Cup Final.

Stamkos, Paul, Maroon and Perry scored in the second period, when the Lightning chased Colorado goalie Darcy Kuemper while pulling away to trim their series deficit to 2-1.

Gabriel Landeskog had two goals and Mikko Rantanen had two assists for the Avalanche. Kuemper gave up five goals on 22 shots before he was replaced by Pavel Francouz, who finished with nine saves.

Lightning anthem singer ready to return to ice after COVID

After a battle with COVID-19 last year landed her in the ICU, Lightning national anthem singer Sonya Bryson-Kirksey is excited to be back on the ice with a microphone in her hand.

Game 4 is Wednesday night at Amalie Arena, where the Lightning have won a franchise-record eight straight playoff games and Colorado lost on the road for the first time this postseason. 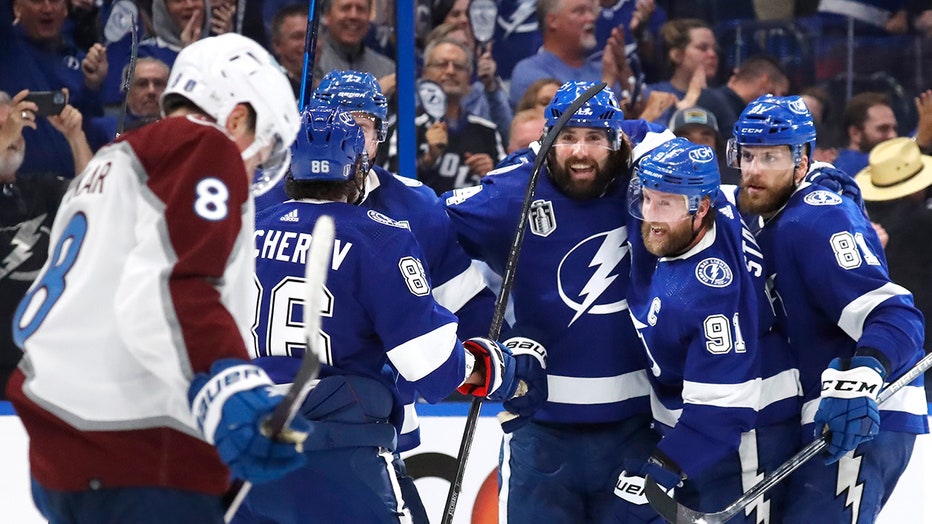 TAMPA, FLORIDA - JUNE 22: Pat Maroon #14 of the Tampa Bay Lightning celebrates his goal against the Colorado Avalanche with teammates during the second period Game Three of the 2022 NHL Stanley Cup Final at Amalie Arena on June 22, 2022 in Tampa, Flo

Two nights after being limited to just 16 shots in a 7-0 loss in Denver, the Lightning rebounded by finally finding way to neutralize Colorado’s speed and solve Kuemper to avoid falling to the brink of elimination.

The Avalanche lifted their goaltender when Maroon scored a soft goal that put the Lightning up 5-2 with 8:45 remaining in the second. Perry reached behind Francouz to tap in a rebound that came off the right post to make 6-2 with 5:02 left in the period.

Sisters Madi and Lauren LoCastro are diehard Lightning fans and their fandom has launched them into social media fame.

The back-to-back champions overcame a 2-0 series deficit in the Eastern Conference final to eliminate the New York Rangers in six games. They’re looking to do it again against Colorado to complete their quest for the NHL’s first three-peat in nearly 40 years.