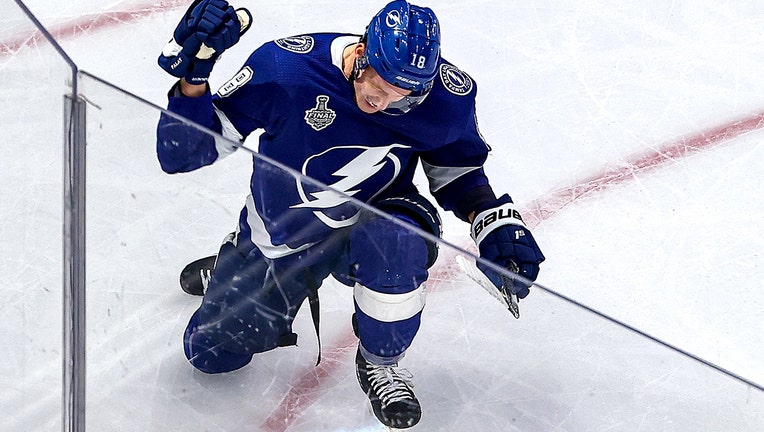 Ondrej Palat celebrates after scoring a goal against the Dallas Stars during the first period in Game Two of the 2020 NHL Stanley Cup Final at Rogers Place on September 21, 2020 in Edmonton, Alberta, Canada. (Bruce Bennett/Getty Images)

McDonagh made hard contact with Comeau’s right shoulder on the hit. Comeau was slow to get up and immediately went down the tunnel.

The Stars announced at the beginning of the third period that Comeau was unfit to play. The 34-year-old is an important veteran role player for Dallas, which lost 3-2 as the Lightning evened the series.

Coach Rick Bowness has not been providing much in the way of injury updates all postseason, so expect the same with Comeau.

The Lightning made a lineup change more related to style than injury, as coach Jon Cooper abandoned the mix of 11 forwards and seven defensemen that was very successful since the second round. He returned to the more traditional 12 and six.

Veteran defensemen Zach Bogosian and Luke Schenn came out and were replaced on the blue line by Jan Rutta and up front with Carter Verhaeghe. Rutta had not played a game since Aug. 5.

Tampa Bay is still without captain Steven Stamkos, who hasn't played since February because of a core muscle injury that required surgery in March. Stamkos had a setback over the summer when it looked like he was on track to return and could make his playoff debut in Game 3 Wednesday.