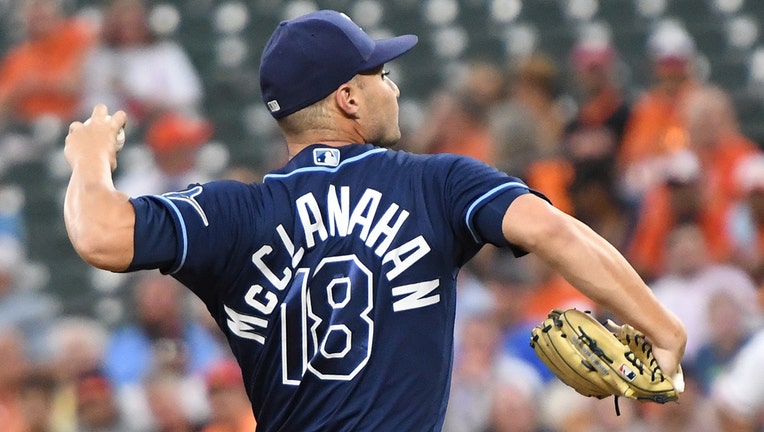 BALTIMORE, MD - JULY 26: Shane McClanahan #18 of the Tampa Bay Rays pitches in the first inning during a baseball game against the Baltimore Orioles at Oriole Park at Camden Yards on July 26, 2022 in Baltimore, Maryland. (Photo by Mitchell Layton/Get

BALTIMORE - Ramón Urías hit a two-run homer in the eighth inning off reliever Colin Poche to undo a marvelous start by Tampa Bay All-Star Shane McClanahan and carry the Baltimore Orioles to a 5-3 victory over the Rays on Tuesday night.

McClanahan pitched seven innings of two-hit ball and was lifted with a 3-2 lead after throwing 81 pitches on a humid night. Tampa Bay manager Kevin Cash said the move was made because McClanahan had started only once (except for the All-Star Game last week) since July 13.

"The biggest factor was the break. Four or five days (off), then four more days," Cash said, adding that he probably would have pulled McClanahan after six innings if his pitch count wasn't so low.

After McClanahan left, Poche (2-1) promptly gave up a leadoff single to Adley Rutschman and Urías followed by

Trey Mancini capped the rally with a sacrifice fly for the surprising Orioles, who moved one game over .500 (49-48) after finishing 52-110 last year.

After struggling against McClanahan, the Orioles were delighted to see someone else on the mound — even Poche, who came in with a 2.27 ERA.

"He started an All-Star Game for a reason," Orioles manager Brandon Hyde said of McClanahan. "He's one of the best pitchers in the American League. We had a tough time with him."

Keegan Akin (2-1) got the last out in the eighth and All-Star reliever Jorge López worked the ninth for his 19th save.

Pitching for the first time since throwing an inning for the AL All-Stars on July 19, McClanahan struck out seven and walked one. His first pitch of the game was hit for a home run by Cedric Mullins and Anthony

"He was really good. I was encouraged that he had that layoff and gave us seven strong innings," Cash said. "We know how good he is. But we also have a lot of confidence in the guys that were, in theory, coming in to get the last six outs."

McClanahan has allowed two earned runs or fewer in a franchise-record 13 straight starts. In addition, he's given up four hits or less in eight consecutive starts.

Although he drove in a run with a flyball, Mancini went 0 for 3 and is hitless in his last 25 at-bats. His name has been mentioned in trade rumors over the past several weeks.

Orioles second-round draft pick Max Wagner signed his first professional baseball contract Tuesday before taking a seat in the Baltimore dugout for a pregame session with the media.

Wagner was primarily a defensive replacement at Clemson last season before blossoming into the ACC player of the year as a sophomore in 2022. The 20-year-old was drafted 42nd overall.

"These last five months have definitely been crazy for me," said Wagner, who didn't start the Tigers' opener but ended up batting .370 with 27 homers.

Wagner hopes to make Baltimore his home in the future, but he probably won't adopt the Ravens as his favorite NFL team. "The whole Ravens thing? That's going to be tough," he said. "Being from Green Bay, it's kind of hard to get away from the Packers."

Baltimore will introduce shortstop Jackson Holliday, the top pick in the entire 2022 draft, on Wednesday.

Orioles: Rookie INF Jonathan Araúz was placed on the 10-day IL with a fractured finger, an injury that occurred while he dived into second base Monday night. Baltimore recalled INF Terrin Vavra from Triple-A Norfolk.

Rays: Drew Rasmussen (6-3, 3.13 ERA) starts Wednesday night in the third game of the four-game series. Baltimore will call upon Tyler Wells (7-6, 3.69), who went 17 straight starts allowing three runs or less before yielding five runs in five innings against the Yankees on Friday night.