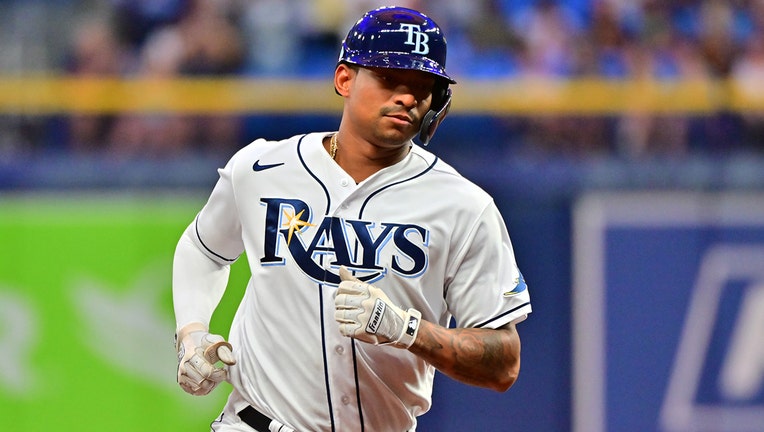 ST PETERSBURG, FLORIDA - JULY 15: Christian Bethancourt #14 of the Tampa Bay Rays runs the bases after hitting a two-run home run in the sixth inning against the Baltimore Orioles at Tropicana Field on July 15, 2022 in St Petersburg, Florida. (Photo

ST. PETERSBURG, Fla. - The Baltimore Orioles' winning streak ended at 10 when Christian Bethancourt hit his first home run for Tampa Bay and the Rays rallied for a 5-4 victory Friday night.

The winning streak was the Orioles’ longest in a single season since they won 13 straight in 1999.

Ramon Urías homered twice for the Orioles, the first multi-home run game of his career, and Trey Mancini also connected. But Baltimore also left the bases loaded without scoring in the first and fifth innings.

The Rays trailed 2-1 in the sixth when they got four straight extra-base hits with two outs.

Bethancourt then launched a pinch-hit home run off the left-field foul pole. He had hit four homers for Oakland this season before being traded to the Rays last week.

Matt Wisler (3-3) got the win in relief and Brooks Raley pitched the ninth for his sixth save in seven chances. Wells lost for the first time in nine starts since May 25.

Mancini and Urías homered early off Rays starter Luis Patiño for a 2-0 lead.

Urías' second homer of the game and ninth of the season came off Colin Poche with Austin Hays on base in the eighth.

Patiño was reinstated to the active roster Friday and pitched for the first time since April 11, when he faced three Oakland batters before leaving with a left oblique strain. He gave up two runs on four hits in 3 1/3 innings.

Wells gave up three runs in eight hits in 5 2/3 innings, striking out six.

Rays: 2B Brandon Lowe (lower back discomfort) and RHP Pete Fairbanks (right lat strain) rejoined the team after rehab assignments and might be activated this weekend. . . . C Mike Zunino (left shoulder inflammation) was moved to the 60-day IL to open a 40-man roster spot for Patiño. Zunino will try to resume baseball activity after the All-Star break. . . . LHP Ryan Yarbrough (left groin tightness) was added to the taxi squad.

RHP Dean Kremer (3-1, 2.15) will make his eighth start of the season for the Orioles on Saturday against a Rays starter to be announced.