Greg Wolf, the in-game host during the Tampa Bay Lightning’s home games, explains how fans can participate in all the action without being inside Amalie Arena for home games.

The defending champions will take on the Montreal Canadiens in front of what’s expected to be a thunderous home crowd.

The Bolts and Canadiens were separated by 17 points in the standings heading into the playoffs. Montreal was the last team to qualify for the postseason. but of course, the only thing that matters is their record in these next 7 games.

The Habs head south with an entire nation backing their campaign. Because of the unique season, this is the first meeting for these teams this year

"It's cliché, you win one you want to win another," Alex Killorn said. "You put so much into this team and this season. Still excitement with this group for sure." 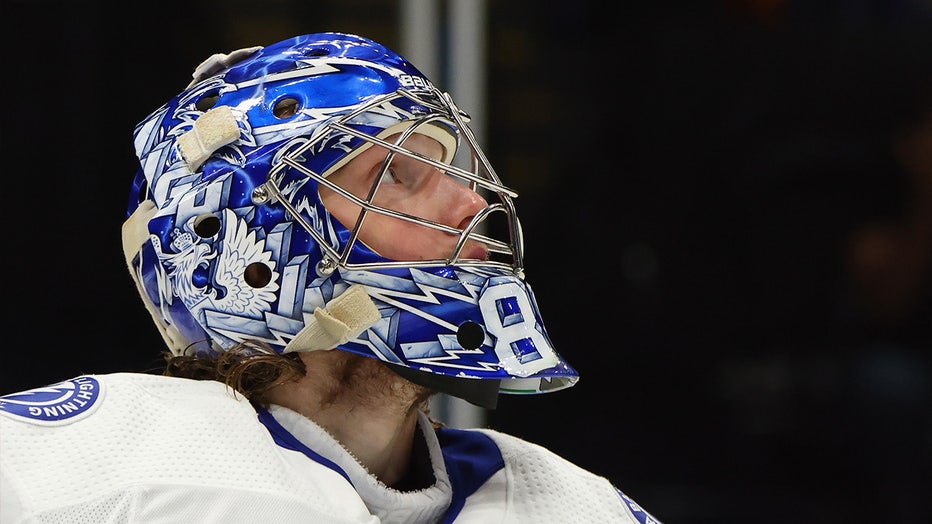 Andrei Vasilevskiy #88 of the Tampa Bay Lightning during Game 4 against the New York Islanders. (Photo by Bruce Bennett/Getty Images)

The Lightning are widely considered the better team here but they aren’t without injury.

All eyes have been on Nikita Kucherov, who was back on the ice this weekend. It’s not clear exactly what he’s been playing through, but he was able to play the full game in the final game of the semifinals against the New York Islanders.

Businesses around Amalie Arena are preparing for the big week ahead. Last year, there were no in person fans during the Stanley Cup games. This year... they're welcome. FOX 13's Jordan Bowen has the story.

PREVIOUS: Local businesses thrilled for the chance to host crowds for the Stanley Cup Finals

Along with the team and the fans, local businesses are pulling for a win, too. Last year was tough for bars, especially the bars and restaurants around the arena that depend on game nights to bring in business.

So, with the playoffs in full swing and fans allowed back in as well, businesses say they’re finally feeling back to normal

When it comes to hockey bars in Tampa, Hattricks in downtown Tampa leads the way.

"For all of Tampa, it's just exciting to get the chance to go back to back and bring another championship to Tampa Bay," said Jeff Single, Hattricks Tavern’s manager. "Seeing everything back it's almost healing. It's almost to a healing point. We're very fortunate that we have a loyal fan base here and loyal customers here."

Tickets to Game 1 are still available but they aren’t cheap. As of Monday morning, just getting in is going to set fans back over $300 for the cheapest seat on Ticketmaster.

Both the Cigar City and Thunder Alley watch parties are sold out as well.