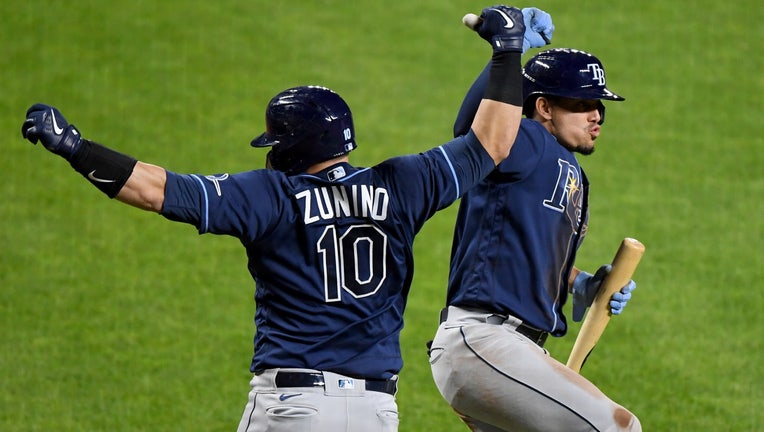 Mike Zunino #10 of the Tampa Bay Rays celebrates with teammate Willy Adames #1 after hitting a two-run home run against the Baltimore Orioles during the fifth inning at Oriole Park at Camden Yards on May 18, 2021 in Baltimore, Maryland. (Photo by Wil

Brett Phillips and Austin Meadows hit three-run homers in the second inning and Ji-Man Choi hit a late drive as the Rays matched their longest winning streak of the year. Tampa Bay is a season-high five games over .500 at 24-19.

The Rays have averaged 8.8 runs during their winning streak. In their previous 19 games, they averaged 3.2 runs.

"Hitting’s contagious, as we saw tonight," Phillips said. "We have to continue to help those pitchers out. They’ve been helping us out all year, so hopefully we can change things around for them and give them a little break."

Baltimore has lost eight of its last 10 and fell to a majors-worst 6-16 at home. It was the first of 19 meetings this season between the AL East rivals, all crammed between May 18 and Aug. 29.

The Rays tagged Matt Harvey (3-4) in the second. They opened the inning with consecutive singles, and an out later Phillips hit Harvey’s fastball to right for his second homer.

Tampa Bay’s Willy Adames poked a double off the third base bag, and Randy Arozarena reached on an infield single before Meadows drilled his ninth homer of the season to make it 6-0.

Harvey yielded six runs on seven hits in 1 2/3 innings. It was Harvey’s shortest start since a 1 1/3-inning outing against the Chicago White Sox on Sept. 6 while pitching for Kansas City and the second shortest of his 153 career starts.

"I didn’t really feel comfortable from the beginning," Harvey said. "I got into some old habits mechanically and gave up some soft hits. Then obviously with runners on, I gave up two hard ones that cost us the game. I have some work to do this week mechanically and kind of go back to square one and really figure this out so this doesn’t happen again."

Zunino hit two-run shots in both the third and fifth innings for his eighth career multihomer game and first since Aug. 8, 2018. Zunino has eight homers and 14 RBIs in his last 16 starts.

"He’s confident in his ability, which he should be because there aren’t many guys who can hit it as hard as he can," Tampa Bay manager Kevin Cash said. "I think he simplified some things and it’s really nice to see it pay off for him. He’s obviously in a very good spot."

Choi added a two-run homer in the eighth, his first of the year after spending the first 40 games of the season on the injured list recovering from knee surgery.

Andrew Kittredge (4-0) pitched 1 2/3 scoreless innings in relief for the Rays.

Baltimore’s Cedric Mullins extended his hitting streak to 11 games with a third-inning single.

Tampa Bay acquired RHP Sean Poppen from Pittsburgh for cash considerations and assigned him to Durham. … Baltimore selected the contract of INF/OF Stevie Wilkerson from Triple-A Norfolk and designated INF Rio Ruiz for assignment. Ruiz hit .167 with three homers and six RBIs while splitting time between time between second and third base.

Rays: LHP Ryan Yarbrough (2-3, 4.20 ERA) draws the start on Wednesday as the series continues. Yarbrough is 3-1 with a 3.24 ERA in eight career appearances against Baltimore.

Orioles: LHP John Means (4-0, 1.21) has pitched 15 scoreless innings with 15 strikeouts and no walks over his last two starts.