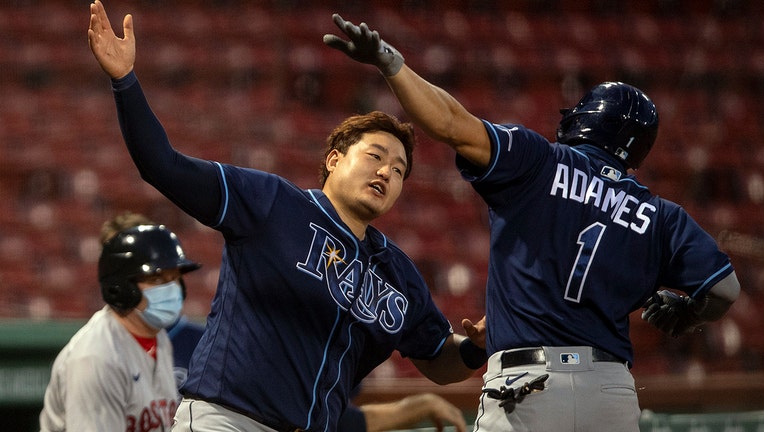 Willy Adames reacts with Ji-Man Choi after hitting a solo home run during the first inning of a game against the Boston Red Sox on August 12, 2020 at Fenway Park in Boston, Massachusetts. (Billie Weiss/Boston Red Sox / Getty Images)

BOSTON, Mass. - Blake Snell pitched five shutout innings and the Tampa Bay Rays backed him with a trio of 400-foot homers to beat the Boston Red Sox 9-5 on Wednesday night and earn their fifth straight victory.

Willy Adames, Brandon Lowe and Yoshi Tsutsugo all homered off Zack Godley, and Austin Meadows hit a solo shot in the ninth after Boston scored five in the eighth to cut into an eight-run lead.

Lowe had a single, homer and double in his first three at-bats but failed in his next two plate appearances to complete the cycle.

J.D. Martinez hit a grand slam to make it 8-5 as Boston's first six batters in the eighth hit safely off Aaron Slegers. But Nick Anderson came on and struck out the next two batters and then, after Alex Verdugo singled, got Jackie Bradley Jr. on a groundout to end the inning.

The Red Sox have lost three in a row and eight of their last 11, with one more against the Rays before heading into a four-game series at Yankee Stadium.

Kevin Pillar had four hits for Boston, but he also got thrown out trying to take second on a ball off the Green Monster and the Red Sox trailing 6-0.

Snell (1-0) allowed four hits and walked no one, striking out six to earn his first win of the season. The 2018 AL Cy Young winner, who struggled with injuries last year, threw a season-high 70 pitches and left with an 8-0 lead.

Godley (0-2) hadn’t allowed a run in eight innings over two previous Fenway appearances. He was charged with eight runs on 10 hits and two walks, striking out three in three innings.

Godley had some bad luck mixed in with a few pitches that he can’t blame on anyone but himself.

Tampa Bay’s first run scored when first baseman Michael Chavis cleanly fielded a bases-loaded grounder but the ball got stuck in the webbing of his glove, preventing him from doing anything but stepping on first. In the second, after Adames had already hit a 400-foot home run, Pillar lost a fly ball that would have been the third out in the lights, and Brandon Lowe hit the next pitch 415 feet for a two-run homer.

Red Sox: Placed OF Andrew Benintendi on the injured list with a strained rib cage. He was injured when he fell down trying to go from first to third on a single in Tuesday night’s game.

Rays: RHP Tyler Glasnow (0-1) starts for Tampa Bay as it tries to sweep the four-game series.