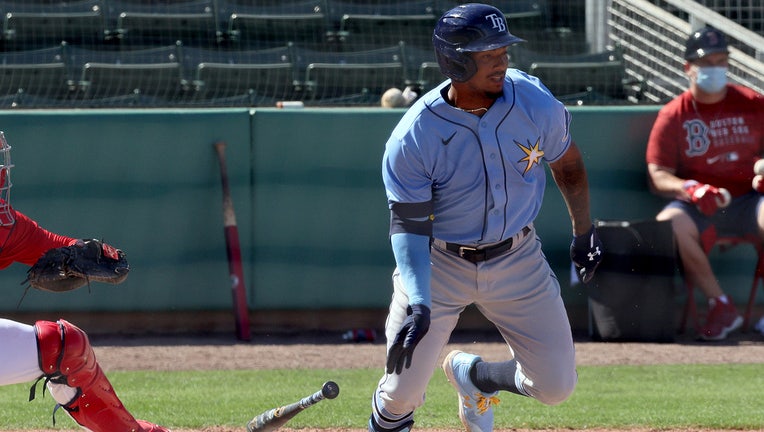 Wander Franco of the Tampa Bay Rays bats against the Boston Red Sox in a spring training game at JetBlue Park at Fenway South on March 12, 2021 in Fort Myers, Florida. (Photo by Mark Brown/Getty Images)

The defending AL champions flirted with winning the World Series during the pandemic-shortened 2020 season and are motivated not only to get back to baseball’s biggest stage but win it all after losing to the Los Angeles Dodgers in six games.

"We’re not disappointed at all with the way last season ended. Obviously, we didn’t want to come up short, but we accomplished way too much to be disappointed about anything," defensive whiz Kevin Kiermaier said. "To be one of the last two teams standing is something to be proud of."

The Rays are coming off back-to-back playoff appearances, their first AL East title in a decade and posting the best record in the league during a season shortened to 60 games and played while adjusting to strict protocols instated due to the coronavirus pandemic.

Baseball fans can finally return to Tropicana Field, but there will be some changes -- including reopening the 300-level seats.

Pitchers Michael Wacha, Chris Archer, Rich Hill and Collin McHugh were the team’s most notable offseason additions. Rookie Randy Arozarena will get an opportunity to play every day after a record-setting postseason that heightened expectations for the 26-year-old outfielder.

"It looks like it’s going to be a great year, with tons of talent in this clubhouse once again," Kiermaier said. "It’s up to us to go out there and perform the way we’re capable."

A versatile lineup will be largely the same, with Arozarena getting more playing time after a breakout postseason that saw him hit .377 with 10 home runs and 14 RBIs in 20 games. The Rays didn’t add much offensively, focusing instead of bolstering the pitching staff this winter. But Cash is confident they’ll score more runs if Austin Meadows, Ji-Man Choi, Yandy Diaz and Yoshi Tsutsugo rebound from subpar years at the plate. Wacha, Archer and Hill will fill openings in a revamped rotation, and McHugh adds depth to an already deep bullpen.

Arozarena was called up from the Rays alternate training site in late August, appearing in 23 games and hitting .281 with seven homers and 11 RBI’s in 23 games during the pandemic-shortened season. He built on that with a record-breaking postseason that included AL Championship Series MVP honors. Left-handed pitcher Shane McClanahan is a newcomer who could have an impact, too, after making his major league debut during the postseason.

Wander Franco, a 20-year-old shortstop generally regarded as the best prospect in baseball, will begin the season in the minors.

Rays happy to welcome Austin Meadows -- and his swing

Austin Meadows put in a lot of work this winter and it shows. He's shaved about 15 pounds, gave up fried foods and sugar, and arrived in Port Charlotte drawing rave reviews from his manager.

In addition to accumulating lots of candidates to help a pitching rotation depleted by decisions to part with Morton and Snell, the Rays have a formidable bullpen and versatile bench to give Cash plenty of flexibility filling out the lineup and making in-game moves.

Tsutsugo, Mike Brosseau, Joey Wendle and Brett Phillips aren’t household names, however Cash is excited to have them at his disposal.

Francisco Mejia, acquired in the trade that sent Snell to San Diego, is a once highly-regarded prospect who will share the catching job with Mike Zunino.

"We have talent and we have depth," general manager Erik Neander said. "That’s what you need to win a lot of games."

Cash expects Tstutsugo, who signed with the Rays as a free agent last winter after playing 10 seasons in Japan, to be more productive this year after struggling to get his bearings in the majors while playing through the pandemic in 2020.

The 28-year-old, who could get playing time as an outfielder and designated hitter, as well as at first and third base, batted .197 with eight homers and 24 RBIs as a rookie.

Cash said the pandemic posed challenges for all players, let alone one making the transition to the majors from another country.

I think he’s going to be a lot more comfortable," Cash said. "Coming over from Japan ... there was just so much on his plate. We’re all very confident he can impact us with the bat, and his versatility (in the field) is going to help."