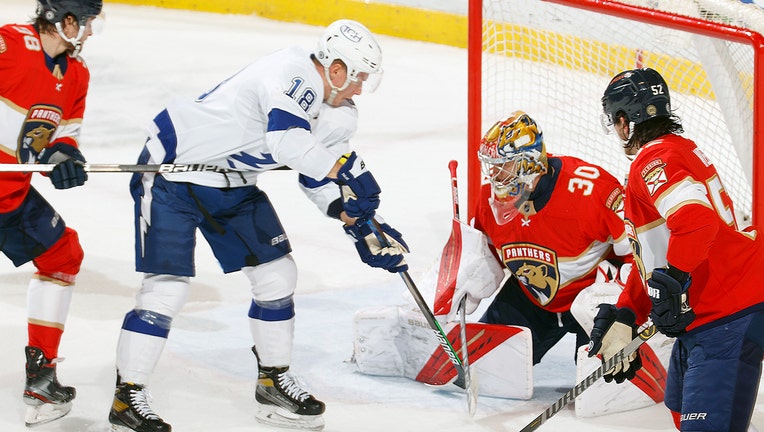 SUNRISE, FL - DECEMBER 30: Goaltender Spencer Knight #30 of the Florida Panthers stops a shot by Ondrej Palat #18 of the Tampa Bay Lightning at the FLA Live Arena on December 30, 2021 in Sunrise, Florida. (Photo by Joel Auerbach/NHLI via Getty Images

SUNRISE, Fla. - The two-time defending Stanley Cup champions on one side. The Presidents’ Trophy winners on the other. Franchises separated by just a couple hundred miles of highway. And two teams that don’t like each other very much.

Tampa Bay and Florida. For the state championship — and so much more.

The Lightning and the Panthers are meeting in the playoffs for the second consecutive season, with Game 1 starting Tuesday on Florida’s home ice. Tampa Bay needed six games to oust the Panthers a year ago in Round 1.

"Florida is a hell of a team," Tampa Bay coach Jon Cooper said. "We’ve watched them all year. We’ve had some amazing battles with them. I think people, especially in Florida, have been begging for the two teams to be contenders and go at it. Last year, many people said that might have been the series of the playoffs. They retooled their team and brought some big names in there and it should be a ton of fun."

MORE: Round 2 schedule for Lightning vs. Panthers released

The Lightning won a Game 7 in Toronto to extend their hope of trying to become the first team to win three consecutive Stanley Cups since the New York Islanders won four in a row from 1980 through 1983. The Panthers are coming off their first series win in 26 years, beating Washington in six games, and now have a shot at avenging last season’s playoff loss.

"That’s when things get interesting and rivalries are born when you play teams multiple times in the playoffs now ... and we know what it’s going to be," Lightning forward Steven Stamkos said. "That was one heck of a series last year in the first round."

The NHL started awarding the Presidents’ Trophy in 1986 to the club with the best regular-season record, and this marks the ninth time in that span that the winner of that trophy has faced the reigning Cup champion in the playoffs.

"They’re a great team," Florida interim coach Andrew Brunette said. "They are who we want to be, and this is a great opportunity for us."

Nobody has scored more goals in the playoffs over the last five seasons than Tampa Bay’s Brayden Point, who has 38 in that span — including 14 on the power play (also a league-best in that span) and seven gamewinners, tying the most of anyone in the last five postseasons.

But he got hurt in Game 7 against Toronto and isn’t expected to play in Game 1 on Tuesday. Cooper said he will be day-to-day after the series opener.

The NHL’s records for postseason power-play percentage go back to the 1978 playoffs. Florida is at the bottom of that chart.

Tampa Bay has scored on 21.3% of its power plays in franchise playoff history, best all-time of any team in the NHL. The Lightning were 7 for 33 with the extra skater against Toronto in Round 1.

The Panthers and Lightning have met 156 previous times, more than they have faced any other club and that doesn’t include plenty of preseason matchups.

Florida has 75 wins, Tampa Bay 71, and they tied 10 times when ties were still a thing. They split four games this season; Florida got five points out of the four matchups because one of its losses came in overtime.

"In the end, I think a lot of guys wanted to play this team," Florida defenseman Brandon Montour said.

Florida needed three goalies in its series last year. But right now, Panthers netminder Sergei Bobrovsky — who went the whole way against Washington — looks very much like he was when he swept then-Presidents’ Trophy winner Tampa Bay out of the playoffs in 2019.

This marks the fourth time that there’s been an all-Florida postseason matchup in the NHL, NBA or NFL. The Lightning beat the Panthers last year, the Jacksonville Jaguars beat the Miami Dolphins on Jan. 15, 2000, and the Miami Heat beat the Orlando Magic in the first round of the 1997 playoffs.

"They’re fun to play against, it’s competitive as hell and I think it’s really good for hockey," Cooper said.

South Florida is the only market left with teams in the NBA and NHL playoffs. The Miami Heat are in the Eastern Conference finals against the Boston Celtics. The Heat play about 45 minutes south of the Panthers’ home arena.

Fans will have to choose who they want to see over the next week or two. The Heat and Panthers are both home Tuesday and Thursday, and Games 4 through 7 of both Heat-Celtics and Panthers-Lightning are scheduled to be on the same nights as well — with all four potential Florida home games set to possibly conflict with Heat home games.