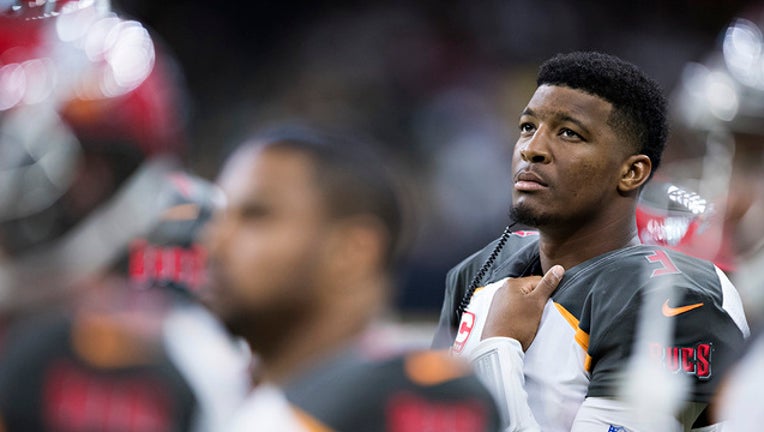 Jameis Winston watches a replay on the screen from the sidelines after being hurt in the first half of a game against the New Orleans Saints. (Photo by Wesley Hitt/Getty Images)

TAMPA (FOX 13) - Jameis Winston will get a few weeks to rest his sore shoulder. Buccaneers head coach Dirk Koetter announced Monday that team doctors decided to sideline the quarterback for at least two weeks based on MRI results.

Winston sprained the AC joint in his right shoulder on last month against Arizona, and he landed hard on that shoulder when he was sacked in the final minute of yesterday’s first half against New Orleans.

The injury forced him to leave the game.

Monday afternoon, Koetter did not go into detail about the MRI results, only saying "it's not structural," FOX 13's Scott Smith reported.

Ryan Fitzpatrick, who stepped in for the second half in the loss to the Saints, will start against his former team, the New York Jets, next week.  Coincidentally, the Jets’ starter will be former Bucs quarterback Josh McCown.

The Bucs are moving Ryan Griffin to the active roster as Fitzpatrick’s backup.